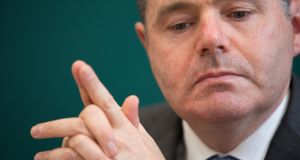 Minister for Finance Paschal Donohoe: The latest half-year exchequer returns, released by the Department of Finance this evening, show the Government collected just under €25 billion in taxes so far this year.

The Government’s finances are comfortably ahead of target for the year thanks to corporation tax, which continues to generate record revenues for the exchequer.

The latest half-year exchequer returns, released by the Department of Finance this evening, show the Government collected just under €25 billion in taxes so far this year.

This was 5.4 per cent up on last year, but also €168 million more than the department had forecast for the six-month period.

The better-than-expected performance was driven by bumper corporation tax receipts, which brought in just over €4 billion.

This was 9.1 per cent or €335 million more than anticipated and signals another strong year for the business tax.

Income tax, the Government’s largest tax stream, meanwhile, generated €9.6 billion, which was 1 per cent ahead of target for the period, reflecting buoyant conditions in the labour market.

Separate figures from Central Statistics Office showed unemployment fell to a new post-crash low of 5.1 per cent in June.

The strong performances in income and corporation tax in the latest returns more than offset a forecast shortfall in excise duty, which came in at €2.47 billion or €188 million below target.

The department said the below-par performance reflected the frontloading of tobacco imports prior to introduction of plain packaging.

VAT, which reflects conditions in the retail sector, came in at €7.1 billion, which was 1 per cent or €69 million less than expected. However, the department noted that revenue from the sales tax was up in year-on-year terms.

Overall, the figures pointed to an exchequer deficit of €823 million for June, compared to a surplus of €2.48 billion at the same point last year.

When adjusted for the impact of the Government’s AIB share sale in June last year, the exchequer balance shows an underlying annual decrease of €323 million, the department said.

This decline was primarily due to an increase in expenditure, offset marginally by increased tax revenue.