Trump says US will ‘do something’ about WTO 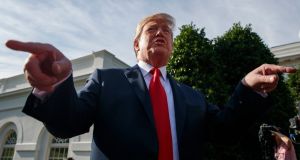 Trump has struck back against US allies with tough tariffs and is planning to impose stringent trade penalties on China.

US President Donald Trump has issued a veiled threat to the World Trade Organisation (WTO), warning if it does not treat the US “properly” that “we will be doing something”.

Speaking during a meeting with Dutch prime minister Mark Rutte, Mr Trump again denied plans to withdraw the US from the WTO but told reporters in the Oval Office that the trade organisation needed to change its ways.

The comments came as he conferred with Mr Rutte on trade and security ahead of next week’s Nato summit in Brussels.

The US president has struck back against US allies with tough tariffs and is planning to impose stringent trade penalties on China later this week.

Asked if he planned to pull out of the WTO, Mr Trump said the trade organisation had treated the US “very badly, and I hope they change their ways”.

He said he was not “planning anything now” but if the WTO does not treat the US properly “we will be doing something”.

The Netherlands is part of the European Union, which has been involved in a trade dispute with Mr Trump over vehicle imports.

Mr Trump has requested his Commerce Department study whether to impose additional tariffs on cars, trucks and auto parts imported from Europe and other foreign markets, prompting a warning from the EU that such an action could lead to retaliation on US goods.

During the meeting with Mr Rutte, Mr Trump said he was “very close” to reaching a number of trade deals, describing them as “fair trade deals for our taxpayers, and for our workers and for our farmers”.

Mr Rutte said the talks would focus on jobs and security and told Mr Trump: “Our aim will be to increase those numbers, to be more successful.”

Mr Trump and Mr Rutte will both be attending next week’s Nato meetings.

Mr Trump has advocated for Nato members to boost their defence spending, and his appearance at the defence alliance will be followed by a closely watched summit with Russian President Vladimir Putin. – AP