Republic could miss out on Brexit bonanza from Canada 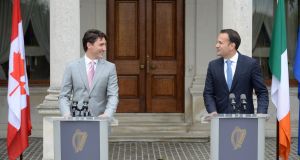 Opportunities arising from Brexit make the Republic the “most attractive” EU state for Canadian multinational investment, but a lack of housing, transport infrastructure and a competition for talent are holding it back, according to a business lobby group.

The Ireland Canada Business Association, which represents major Canadian multinationals in the Republic such as Irish Life, Voxpro, and Shopify, said congestion and the cost of office rental in Dublin were also “key obstacles”.

“Opportunities in Brexit, a new IDA office in Toronto, and unique trade agreements currently make Ireland most attractive EU country for Canadian investment – but operating environment must be improved,” it said.

“Lack of housing, transport infrastructure, and increasingly a competition for talent are the top three obstacles preventing the expansion of Canadian multinational companies in Ireland.” The association based its conclusions on a survey of its members.

Canadian multinationals are “rapidly growing in size and significance” in the Republic, and are set to become one of the “next major economic influences” in the State.

“The number of jobs provided by Canadian companies in Ireland has grown by almost 40 per cent since 2014,” it said.

“With the future opportunities presented by Brexit and the recently enacted Comprehensive Economic and Trade Agreement between Canada and Europe, this rate of this growth can increase exponentially with the right operating environment.”

Ireland Canada Business Association vice-chair and director Chris Collenette said Britain’s exit from the EU next year would only increase the rate of job growth in the Republic.

“Figures are clearly showing that Canada is becoming a major economic player in Ireland,” he said.

“Jobs growth from Canadian firms is up almost 40 per cent and Brexit will only increase this number as more Canadian companies look to Ireland, as opposed to the UK, as a gateway to the EU.”

However Mr Collenette also cautioned against missing out on the potential investment opportunities from Canadian companies.

“The IDA’s recent decision to open a base in Toronto highlights the role Canada will play in future development of Ireland’s economy,” he said. “But we are in danger of missing out on this opportunity.

“Our members – some of Ireland’s largest employers – have identified that a severe lack of housing, urban transportation and competition for talent are serious obstacles to growth.

“Recent reports from National Competitive Council and also the IMF back up these claims.

“The Ireland Canada Business Association believes that, by addressing these key issues on a national level, Ireland can take advantage of the huge economic opportunities we have as a result of our unique position as the gateway to Europe.”