Noisy London, pricey Dublin and the Silicon Valley mansion with a ‘pizza room’

Planet Business: All the latest restaurant news from McDonald’s to the Red Hen 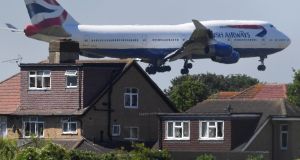 Number of people who had left reviews – mostly positive – of the Red Hen, in Lexington, Virginia, before the restaurant hit the news for ejecting White House press secretary Sarah Huckabee Sanders as a protest against the “inhumane and unethical” Trump administration.

Number of reviews currently on the Yelp page, which has been bombarded with one-star verdicts from people who haven’t been to the restaurant but seem to have Nazi insignia images primed to upload. Although there are new five-star reviews, too, its average rating is now 1.5 stars.

Number of reviews that have been written about local businesses on Yelp as of the end of March 2018. The company, founded in San Francisco in 2004, has put the Red Hen page on “active clean-up alert” which, judging from the state of it, is still ongoing.

Image of the week: Heathrow hell

Living in cities is brilliant. But this, this is the stuff of nightmares. Even if the windows to your house don’t allow regular sight of big fat fuselages storming in to land in what looks like your back garden, there’s the sanity-depriving noise pollution. Heathrow has a “curfew” from 11.30pm to 6am, which is not quite the length of a good night’s sleep, and in any case it can still land 5,800 flights a year during this time. Amazingly, this is one of the best curfews for major airports, but the plight of west Londoners living in its shadow is only going to intensify following this week’s vote by British MPs to approve, for economic reasons, the construction of a third runway. The protests have been drowned out.

After trialling “muffin toppers” in its restaurants in Baltimore in the US, McDonald’s is now looking to the best part of the muffin to be its new hero at breakfast, according to Bloomberg, in a ploy that has echoes of a 1997 episode of Seinfeld in which Julia Louis-Dreyfus’s character Elaine sold only muffin tops and tried donating the leftovers to a soup kitchen (which rejected them because they were “just stumps”). The fast food chain says it has “a new renewed, intense focus” on breakfast, while Google says there are still 160 calories in a McDonald’s Blueberry Muffin Topper – roughly a tenth of a calorie every time someone on Twitter has joked about McDonald’s giving people muffin tops for years.

Getting to know: Scott McNealy

Scott McNealy, co-founder of computer company Sun Microsystems (now owned by Oracle), is downsizing. And this is news in Silicon Valley because the “Palo Alto castle” he has put on the market has a record-asking price for the area of $96.8 million (€83.5 million). The mega-mansion, built 10 years ago, contains a gym, pool and spa, indoor basketball court, poker room, billiard room, dancefloor, convertible tennis court / indoor ice rink, climbing wall and a golf practice area (the oldest of his four sons, Maverick, is a professional golfer). If that sounds exhausting, then luckily there’s also a wine cellar, an indoor cinema and a “pizza room” (new life goal). McNealy (63) told the Wall Street Journal that he and his wife were now empty nesters and, as such, “the house deserves more activity than the two of us”. The panic room comes pre-installed.

Mercer’s annual cost of living survey tries to work out which cities are the most expensive for workers moving for their jobs, taking New York as the base city for all comparisons and measuring currency movements against the dollar. So which euro zone cities were the priciest in this year’s list?

5. Rome: The eternally expensive city came in 46th in the overall list.

3. Paris: The French capital was up 28 places to 34th overall, recovering from a drop the previous year, but it is no longer the most expensive city in the euro zone. It does, however, have a “burgeoning tech scene”, according to Facebook’s brand new print title, Grow, so best of luck, Paris.

2. Milan: The Italian fashion capital was one of two euro zone cities to leapfrog Paris in this year’s rankings, the other being . . .

1. Dublin: Soaring rents have propelled Dublin from 66th to 32nd in the overall list, with the city taking the title of most expensive in the euro zone, after a 15 per cent rise in the cost of living over 20 years. Well done, everybody.