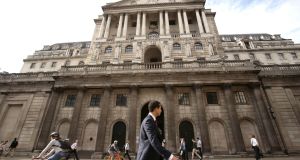 The Bank of England is concerned about how European financial services companies will serve UK customers after a hard Brexit. Photograph: PA Wire

The Bank of England has fired shots at the European Commission in an increasingly acrimonious dispute over preparations by the financial sector for Brexit.

The central bank said on Wednesday that the commission was standing in the way of financial stability across Europe in the event of the UK leaving the EU a transition period next March.

In its twice-yearly Financial Stability Report, the Bank of England criticised the EU27 for “not indicat[ing] a solution analogous to a [UK] temporary permissions regime” and that meant the European customers of UK banks were reliant on them being able to transfer contracts to the EU before Brexit.

In areas such as derivatives, where £29 trillion (€33 trillion) of contracts are at stake, the central bank said political action on both sides of the English Channel was needed to ensure the contracts could still continue and the bank’s Financial Policy Committee said “material risks remain”.

In its latest assessment of financial stability risks, the Bank of England was relaxed about the overall safety of the UK banking system, saying it was strong with three times the buffers of capital, which could be used in a crisis, compared with 2007.

Domestic risks to the financial system remained “standard” the Bank of England said, although it acknowledged global risks “remain material and have increased”. – Copyright The Financial Times Limited 2018