Cliff Taylor: Don’t blame business for warning about the costs of trade wars and Brexit 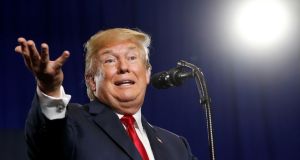 US president Donald Trump. He is leading the charge towards economic nationalism, a kind of “we win, you lose” economics. Photograph: Reuters

President Donald Trump accuses Harley-Davidson of being “first to wave the white flag” as it threatened to move some production abroad in response to EU tariffs on its motorcycles. Meanwhile, British foreign secretary Boris Johnson, when asked about the fears in UK industry about Brexit, reportedly responded “f-ck business”.

Businesses on both sides of the Atlantic are – finally – finding their voice. So long silent on Brexit, boardrooms of companies operating in the UK are now starting to spell out the consequences, with warnings by Airbus followed quickly by some major car-makers.

In the US, Harley Davidson says it must move some production overseas to avoid tariffs imposed by the EU on its exports as part of a package responding to Trump’s own trade moves against European steel and aluminium exports.

The aggressive political response to these business moves are signs of how much is at stake. Trump is leading the charge towards economic nationalism, a kind of “we win, you lose” economics. Pretty much every trade expert says this will only leave all sides worse off in the end, even the US, which relies less on trade than European economies.

A lot rests for Trump on persuading the electorate that he is right – hence accusations that the motorcycle company planned to move production overseas anyway, and that it would now be taxed “like never before” when selling in the US.

Exactly the same tactics are being applied by the Brexiteers, with Airbus accused on being part of “project fear” – the derogatory name for those warning of the consequences of the UK’s exit – and threats that it could lose valuable UK defence contracts.

I had wondered why British business had been so reticent to speak out on Brexit. Now you can see why, with the flak facing one of the first to lay it on the line. It is vital for the Brexiteers that this does not develop too much momentum before the UK leaves. They know the bad news is coming – they just want it all to happen too late for anything to be done to avoid it.

There is an interesting question behind all this. Are there limits to economic nationalism in today’s globalised world of business and commerce?

It was feasible to put trade barriers up in the 1930s when, typically, bulky products were manufactured in country A and sent by boat to country B. It still devastated world trade. But how does it work almost 90 years later, when trade has grown exponentially, involves services as well as goods – and often a mixture of both – and when supply chains criss-cross borders?

The business of delivering a nationalist agenda is a heck of a lot more complicated and unpredictable now. Cross-border business and trade links are deeply embedded, and are based on a complex of agreed rules and regulations.

Trump – and the Brexit lobby – want to tear up much of the rule book and tell us it doesn’t matter. Hence the furious political response to those who have spoken up. Companies that don’t play ball can be taxed, or lose contracts, contrary to exiting practices and possibly even the law.

This rhetoric has been made possible by the failure to spread the gains of economic growth – and by the costs of the big economic crash. The problem is that the “cure” is likely to be worse than the disease. It also has a nasty and divisive side in terms of “controlling” immigration.

How can wings made in north Wales be put on at Airbus HQ in Toulouse if no one has passed them as meeting standards?

Politicians should not be surprised by big businesses pointing out the obvious. If trade tensions grow, Harley will only be the first of many. Bourbon producers – also targeted by EU tariffs – will be considering their options. And, indeed, the Irish whiskey industry, which depends on the US for half of its sales by volume, will hope that Trump does not target it in response.

In Brexit Britain businesses will also be focused on their own bottom line. Many financial firms are already creating European headquarters in the euro zone so they can continue to trade in the single market. Now manufacturers are warning about the impact on supply chains.

Airbus, which employs 14,000 people in the UK and has 4,000 UK suppliers, warns a hard Brexit would force it to reconsider its UK presence. It is worried about the impact of delays and customs on its production of wings and other aircraft parts in the UK, and, crucially, on the regulatory implications if the UK leaves the European Aviation Safety Agency. This is no bureaucratic box ticking. How can wings made in north Wales be put on at Airbus HQ in Toulouse if no one has passed them as meeting standards?

BMW, whose Mini car plant in Oxford brings in five millions parts a day, has also warned about its future in the UK, and the car industry representative body has warned that it is membership of the EU customs union and single market which has allowed an industry built on supply chains across the EU to thrive in Britain.

These are the costs of a lurch to economic nationalism. The political rallying cry on both sides of the Atlantic is that the fight – and any initial costs – will be worth it. But with jobs and investment now depending on the international nature not only of trade in final products but also in complicated supply chains, the potential disruption and economic cost is enormous.

Big businesses have been rightly chastised for some practices, typically tax avoidance, in recent years . But no one can criticise them for pointing out the obvious – trade wars and Brexit will cost us all. There is no dividend here, only a price.