Freight group warns of ‘near paralysis’ at Border after Brexit

Almost 13,000 commercial vehicles estimated to cross the Border every day 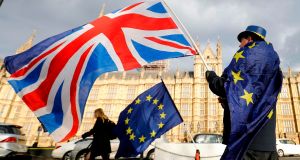 Brexit and the Border: the Freight Transport Association says a ‘unique solution’ is needed. Photograph: Getty

A bad or no deal result in Brexit negotiations could lead to “near-paralysis of freight” at the Border, the UK’s Freight Transport Association has warned.

Seamus Leheny, policy manager of the association in Northern Ireland, believes that without a “unique solution to solve the issue around the Border”, the North is in danger of being “disproportionately affected compared to Great Britain”.

Mr Leheny told a King’s College London research initiative – UK in a Changing Europe – that businesses and logistics organisations in the North are more dependent on being able to transport their products into the EU than their counterparts in Britain.

Mr Leheny said the growing number of commercial vehicles that cross the Border every day on the island, recently estimated at 12,788, “clearly demonstrates that both economies, north and south, continue to become more reliant on one another as our supply chains become more entwined”.

He fears that without a Brexit deal that recognises the importance of those supply chains, the “free-flowing movement of goods and people” could be under threat. The association is not confident that the UK government’s proposed technological solutions for the Border will solve the issues.

“Even if customs checks were to be imposed on cross-Border traffic at the minimum 1 per cent level, then we would see about 128 physical inspections of goods vehicles daily. The impact of such checks would be additional costs for transport operators, delays and missed schedules,” Mr Leheny warned.

He believes the biggest future challenge for supply chain logistics on the island revolves around the EU’s Council Directive 97/78/EC of December 18th, 1997.

Mr Leheny said would mean that without a special arrangement or deal in place once the UK leaves the EU, veterinary checks and the associated infrastructure would have to be put into place at the Border, which would lead to every logistics vehicle having to stop to have documents and load checked.

Mr Leheny said the UK might also have to reciprocate the arrangements for any goods entering the North.

“This not only contradicts the government’s assurances of a frictionless Irish Border, but it would lead to near-paralysis of freight at the Border, since 33 per cent of export sales [£2.7 billion] from Northern Ireland to the Republic is food and animals,” Mr Leheny said.