Mortgage approvals exceed €1bn in May 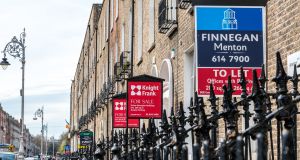 A total of 4,473 mortgages were approved in May 2018, with almost half granted to first-time buyers in terms of volume and value. Photograph: iStock

Irish mortgage approvals exceeded €1 billion in May, with remortgaging activity continuing to drive growth in the market, a new survey has shown.

The figures from the Banking & Payments Federation of Ireland (BPFI) showed a 14 per cent year-on-year rise in the value of mortgage approvals, with a 10 per cent increase in volume.

It is the first time since at least 2011 that mortgage approvals have reached this level, analysts at Goodbody said. The BPFI began tracking the figures in 2012.

A total of 4,473 mortgages were approved in May 2018, with almost half granted to first-time buyers in terms of volume and value. Mover purchasers accounted for 1,206 mortgage approvals.

Approvals were up 9.8 per cent year on year and by 19.2 per cent month on month.

Lending for house purchases has grown by 6 per cent so far in 2018, as average loan size increased.

The value of remortgaging grew by 106 per cent year on year in May, and 81 per cent in the year to date compared with the same period a year earlier.

“This is indicative of both the rise in the extent of equity in the system and increased competition in a growing market,” Goodbody’s said in a note.

There were 3,595 purchase mortgage approvals valued at €851 million in May, an increase of 2.5 per cent in terms of volume and 6.8 per cent in value year on year.

However, representatives of Brokers Ireland said that while the figures reflected positive momentum, drawdowns were a more precise indication of real activity. These could be up to 50 per cent lower than approvals, as approval could be given to several potential buyers for the same home, but only one draws down the mortgage.

“In terms of first-time buyers, the traditional mainstay of the mortgage market, 50 per cent approximately are such, which amounts to a very low figure reflecting the critical lack of new homes in a market where demand is estimated to be of the order of 40,000 new homes annually,” Rachel McGovern, director of financial services at the organisation, said.

The group, which represents almost 1,300 firms, said the growth in the number of people switching mortgages was welcome.

“That’s a positive trend, it means people are paying more attention to seeking out better value,” she said.