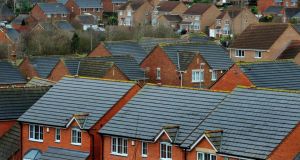 The rebound in Irish property will moderate substantially this year as tighter lending rules exert a downward pressure on prices, a report by the Society of Chartered Surveyors Ireland (SCSI) said.

The group’s annual review and outlook for 2015 predicted the pace of property price inflation would moderate to 5-10 per cent this year.

The report, which is based on a nationwide survey of its members, said property values rose by 14 per cent nationally in 2014 and by 19.5 per cent in Dublin.

However, it noted the pace of growth in Dublin moderated in final quarter due in part to uncertainty over Central Bank proposals to restrict lending.

The bank is expected to announce new curbs on lending this week, which may compel buyers to have 20 per cent deposits before getting a mortgage.

The SCSI said 80 per cent of its members believe the Central Bank’s loan-to-value proposal was too restrictive.

Instead, they recommended a deposit requirement in the 10-15 per cent range, the society said.

In its report, the SCSI said rents increased by an average of 11 per cent nationally last year, and are now just 5-10 per cent off peak levels in some prime Dublin locations.

The society noted that despite a 33 per cent increase in housing completions last year, the figure is still less than half of what is required annually.

Simon Stokes, chair of the SCSI’s Residential Property Professional Group said: “The lack of supply of family type homes in the main urban areas together with increased demand from prospective purchasers has resulted in double digit increases in average property prices across the country, particularly in the first nine months of the year. Supply restraints will lead to increased demand in commuter belt counties”.