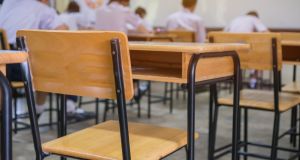 During the period under review, the business became ensnared in public row with the Department of Education over aspects of its school building programme. Photograph: iStock

Pre-tax profits fell by 73 per cent to £1.227 million (€1.45 million) last year at the specialist building group that is in legal dispute with the Department of Education over its school building programme.

New accounts from the McCloskey family-owned Western Building Systems (HLD) Ltd show that the group’s pre-tax profits decreased sharply as revenues declined by 27 per cent from £34.35 million to £24.88 million in the 12 months to the end of April last.

In a report with the numbers, the company’s directors said the group’s order book was “already very strong”, and they pointed to strong post-year trading.

During the period under review, the business became ensnared in a public row with the Department of Education over aspects of its school-building programme.

WBS has built 42 schools around the State in the last 15 years and the Department of Education is suing the company in the High Court.

In a note attached to the accounts, the directors state that the company and its legal advisers are strongly contesting the case