Planet Business: The week when Johnson unleashed himself again 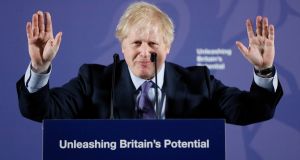 Image of the week: Johnson’s reality

Boris Johnson is either channelling his best Eamon Ryan wolf-impression vibe in this picture or he’s about to do the dance routine from the Spice Girls single Stop.

In any case, the microphone is perilously close to Hitler moustache territory and the phrase “unleashing Britain’s potential” is a combination of words one never wants to see or hear in any context ever. Johnson used the occasion of his Brexit trade speech on Monday to repeat his philosophy that he doesn’t believe in what he called “prophecies of doom”, which explains his confusion about climate change as well.

To this end, unnamed Downing Street types have been busy briefing journalists – the ones they still speak to – about the prime minister’s displeasure with business lobby groups the CBI, the Institute of Directors and the British Chambers of Commerce. They stand accused of being a bit concerned about the prospect of a trade negotiation disaster when apparently they should instead be preparing their members for “upcoming realities”.

102 million Average number of US-based viewers who watched last Sunday’s Super Bowl between the Kansas City Chiefs and the San Francisco 49ers, at which Irish businessman Declan Kelly was caught snoozing on camera.

$5.6 million The cost of a 30-second advertisement during the event, with brands such as Coca-Cola, Budweiser, Amazon Prime, Google and the formerly ubiquitous podcast sponsors Squarespace among those to take broadcaster Fox up on its offer.

$11 million Sum that Democratic presidential candidate Michael Bloomberg spent on a campaign ad that aired during the Super Bowl, an outlay from his personal wealth that the Washington Post duly reckoned was the equivalent of the median income American household splashing out on a 14-inch pizza.

Getting to know: Lawrence Stroll

The name’s Stroll, Lawrence Stroll, aka the Canadian billionaire who has rescued James Bond’s favourite marque, Aston Martin. Stroll has an ironic penchant for cars, being best known in some circles as the boss of the Formula One team Racing Point, for which his son is a driver.

He’s also fond of collecting Ferraris. But he made his fortune in a different type of style, having bought big-time into the global expansion of male fashion brands Tommy Hilfiger and Michael Kors – a business move that elevated him to the superyacht league. Racing Point will from next year be rebranded as Aston Martin as part of Stroll’s rescue package for the luxury car company, allowing it to avoid its eighth bankruptcy in 107 years. He’ll be hoping he has better luck than its previous investors.

When most of us deactivate our Facebook accounts, it’s noticed by an average of one and a half people. But for celebrities, leaving social media is a massive deal, one that they will be required to explain at some point. Here’s the latest on who has had enough.

1. Stephen King The horror novelist says he is uncomfortable with the “flood of false information allowed in its political advertising”, nor is he confident in its “ability to protect its users’ privacy”. He’ll be sticking to Twitter.

2. Alexandria Ocasio-Cortez The US politician who clashed most effectively with Facebook founder Mark Zuckerberg on Capitol Hill last year “personally gave up” on the platform on which she started her first campaign.

4. Jim Carrey The actor didn’t just leave Facebook, he dumped his stock in the company in early 2018, saying Facebook had “profited from Russian interference” in the US presidential election and was “still not doing enough to stop it”.

5. Cher The singer also quit two years ago, describing the decision as “very hard”. But if she could turn back time, would she join it in the first place?