Economic impact of centre estimated at £60m a year 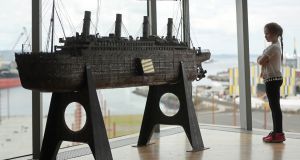 Titanic Belfast, which opened in 2012, currently has nine interactive galleries.

Titanic Belfast plans to invest £3 million (€3.5 million) to boost the attraction’s interpretive and interactive galleries which help illustrate the story behind the ill-fated liner, the city and the people that built her.

Titanic Belfast, which opened in 2012, currently has nine interactive galleries which illustrate how the liner was built in the shipyard in Belfast, and what life was like onboard.

According to Judith Owens, Titanic Belfast’s chief executive, it will be the organisation’s “most significant project to date”.

“We will of course keep the Titanic story at the heart of everything we do but we want to push the boundaries and we will use technology in a very innovative and different way to do that.

“The gallery refreshment programme will complement the existing interactive galleries but will ensure that we remain as one of the world’s leading visitor attractions and our aim is that our customers leave Titanic Belfast with memories that last long after their visit,” Ms Owens said.

Four years ago Titanic Belfast, which cost £77 million to develop, was named the world’s leading tourist attraction at the World Travel Awards.

New figures released by the charity that owns the Titanic building and the operator of the building show that it has welcomed six million visitors from more than 145 different countries since it opened and helped to generate a £319 million in “additional expenditure” for the North’s economy over the seven years to 2019.

According to an evaluation report carried out by Deloitte NI, Titanic’s “economic impact” in Northern Ireland has grown from “£38 million on average in its first three years to £60 million per year”.

1 Majority of employees don’t want to return to pre-Covid working patterns
2 The $6bn judgment pitting Nigeria against Irish businessmen
3 Almost 600 social and affordable houses given green light in Dublin
4 Homeworking is depriving me of juicy gossip
5 If tourists are such pariahs should we not be testing them on arrival?
6 ‘My rent here is so low it’s a joke’
7 Tobacco giant’s menthol-ban substitutes take 5% share of Irish market
8 State to auction €750m worth of Irish treasury bills
9 Investors in Irish solar energy fund in line for €20m payout
10 European shares rally as attention turns to EU recovery fund
Real news has value SUBSCRIBE