Martin Wolf: Britain’s demands for its negotiations with the EU are unrealistic

UK prime minister Borjs Johnson said if the UK doesn't get a Canada style trade deal then the deal "will have to be based on our existing withdrawal agreement with the EU”. 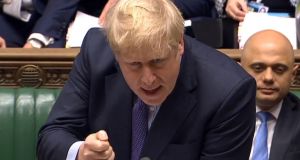 Boris Johnson has an autonomy fetish. The UK prime minister’s fetish is the belief that his country not only has the sovereign right to shoot itself in both feet, but also has a duty to do so if the alternative is to allow EU institutions any role in its affairs. Brexit, he insists, means autonomy.

If he persists with this demand, it is likely that, early next year, the UK will suffer the complete rupture of trading relationships it has built up over 47 years.

Yesterday, the British government presented its demands for these negotiations. Unfortunately, they are unrealistic in three respects: the first is the hope that any agreement will be between “sovereign equals”; the second is the belief that the EU would agree a Canada-style agreement; and the third is that an Australian relationship with the EU, governed by World Trade Organization rules, is a reasonable alternative.

As a matter of international law, the UK is sovereign. But sovereignty is not the same thing as power. The EU has 446m people, against the UK’s 66m. Its economy is almost six times as big as the UK’s. The EU is also much less dependent on trade with the UK than is true the other way round. Let us be clear: this is not a relationship between equals.

The EU’s characteristically thorough mandate for the talks makes clear how it sees the negotiations. First, Brussels sees the “new partnership” as a “single package”. This is to cover “general arrangements” including the provisions on governance; “economic arrangements including trade and level playing field guarantees” (my emphasis); and security arrangements including law enforcement and judicial co-operation, foreign policy, security and defence.

Second, the issues are many and complex. These include data protection, participation in EU and Euratom nuclear programmes, trade in goods and services, intellectual property, public procurement, mobility of people, aviation, road transport, energy, fisheries, judicial co-operation, foreign policy co-operation and cyber security. It beggars belief that all this can be agreed and ratified within a year. The idea that the UK should walk away if all this cannot be agreed in that brief time seems insane.

Finally, the EU states that “given the. . .UK’s geographic proximity and economic interdependence, the envisaged partnership must ensure open and fair competition. . .To that end, the envisaged agreement should uphold the common high standards in the areas of state aid, competition, state-owned enterprises, social and employment standards, environmental standards, climate change, and relevant tax matters.” What the EU is saying here is that your autonomy stops where it inconveniences us. If the UK insists upon it, then the deal it seeks may not be agreed.

To the reasonable conclusion that no deal is likely, three replies are possible.

The first is that the EU will give in. That is quite unlikely. For the EU to back down on the issue of the “level playing field”, to take one example, would require it to trust the UK not to compete by undermining the EU’s standards. But what else – the EU will ask – is all this freedom for? What else have Brexiters been saying it is for? You are asking us to trust you, Mr Johnson. Why should we?

A second response is that it does not matter to the UK if no deal is reached. But it does. Even if the failure were “only” on the trade aspects of the negotiations, with other parts agreed, which is unlikely, the costs for the UK of a sudden disruption might be huge. In 2018, the government’s own analysis concluded that the UK economy might end up between 6 and 9 per cent smaller, in the long run, under a “no-deal” scenario. This is significantly worse than the already bad outcome of a free trade agreement in goods. Moreover, a sudden shift from current arrangements would impose a shock. The UK would not, as Mr Johnson claims, “prosper mightily”. Responsible governments do not inflict such shocks on their economies.

A last response is that, in the end, Mr Johnson will retreat from his red lines. That is what he did last October over the Irish border issue, when he accepted the economic dismemberment of his own country, something his predecessor had refused outright, all the while denying he had done any such thing. The ability to surrender while successfully insisting that one has not is a form of genius. Maybe, the prime minister can find a description for humiliating surrenders that dress them up as great victories. I would certainly not put it past him.

This, however, is hope against hope. As things stand, there is a fundamental conflict over the scope of the envisaged agreements, over governance of the new deal and, probably most vexing, over data, fish and the “level playing field”. There is in brief much disagreement over the nature of the prospective relationship and very little time in which to agree.

A likely result is no deal. If so, the greater the ensuing disruption, the more the Johnson government is likely to try to blame it on the EU. It might even seek revenge, possibly by trying to ally itself with the US against the EU.

Above all, remember this: a limited free trade agreement would be better than no deal; but it will still hurt. – Copyright The Financial Times Limited 2020