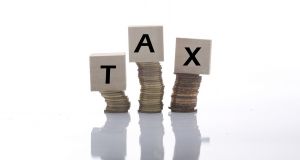 A number of the proposals referred to are in the Sinn Féin manifesto, which calls for an increase in income tax on those earning over €100,000

The business impact of some of the proposals featured in the general election manifestos would be “ grave” and would threaten growth and job creation, according to IBEC, the business lobby group.

In a note to its members, IBEC chief executive Danny McCoy refers to proposals to increase personal and business tax – which featured in Sinn Féin’s manifesto – as well as proposals to alter some big state investment projects included in the National Development Plan, which feature in a number of party programmes.

Mr McCoy warns that proposals in the areas of tax, industrial relations and the National Development Plan “threaten to undermine the nation’s pro-business culture and today’s business model which we have nurtured over decades.

“Above all, it will undermine the ability of business to create the resources which allows government to provide for society and address the big challenges that lie ahead.”

The IBEC note does not mention any specific political party. A number of the proposals referred to are in the Sinn Féin manifesto, which calls for an increase in income tax on those earning over €100,000, an increase in employers’ PRSI – applying at the same income level – and a change in the tax regime for pensions.

The Green Party has also called for restrictions in pensions tax relief for higher earners and – like Sinn Féin – Labour has called for the progressive withdrawal of tax credits on incomes over €100,000.

Referring to these various tax proposals. IBEC says they are further alternations “to a system which is already regarded as the most redistributive in the EU”.

This refers to recent research showing that the Irish tax and welfare system redistributes significantly from people on higher incomes to those on lower incomes.

The organisation also criticises proposals to end the SARP tax relief for foreign executives and to change the rules regarding the taxation of some intellectual property earnings of multinationals, also both features of the Sinn Féin manifesto.

Mr McCoy says that “a number of party manifestos propose to remove, alter, substitute or change projects in the National Development Programme, which are already identified.” Again no specific parties are mentioned. Among the parties which have called for changes are the Green Party, which has said that the programme and the new national planning framework need to be overhauled.

IBEC says that changes to the programme “will undermine certainty for business planning sustainable investment, regional connectivity and slow the decision making process around large scale public capital investment that is so crucial.”

The third area highlighted by McCoy in the proposed end to the “voluntarist model of industrial relations” whereby some companies – including some of the major multinationals – do not recognise unions.

Sinn Féin proposes an end to the voluntarist model and recommended a legal requirement on companies to recognise trade unions. IBEC warned that this would “impinge on labour market flexibility which would have significant unintended consequences for both employers and workers.

“Sinn Féin’s manifesto says that policy needed to recognise that “ the current voluntarist system has been undermined by the union busting behaviour of some employers.”

Sinn Féin has previously pointed out that its commitments are fully costed and would deliver a significant budget surplus.

GSK to produce 1bn doses of coronavirus vaccine booster in 2021 08:42
CNOOC will not exercise rights to buy Tullow stake in Uganda fields 08:38
Hong Kong stocks fall amid concerns over possible US sanctions 07:49
EasyJet, American Airlines to cut 30% of staff amid coronavirus disruption 07:31
Irish economy to contract by 12%, ESRI forecasts 06:39

1 Ross O’Carroll Kelly column 'not racist towards English people'
2 Irish economy to contract by 12%, ESRI forecasts
3 What is in the EU’s €750bn recovery plan and how will it affect Ireland?
4 Brown Thomas and Arnotts shoppers will be able to book time slots for entry
5 Beware of the rush to get back to normal business amid Covid-19
6 EU needs to rebuild GDPR after only two years
7 Irish banks’ failure to innovate could leave them written off for good
8 Joint accounts: if one of us dies, can the other access the money?
9 Mortgage payment-break numbers rise to 78,000
10 O’Leary casts unwelcome light on a very Irish political compromise
Real news has value SUBSCRIBE