Pretax profits more than double at Irish arm of CBRE to €4.1m 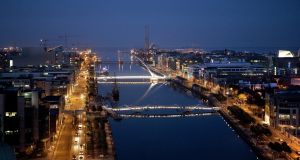 CBRE Unlimited’s operating profits rose 37 per cent to €4.1 million after paying out €27.8 million in administrative expenses

The commercial property boom in Dublin contributed to pretax profits more than doubling at the Irish arm of property company CBRE to €4.1 million in 2018.

CBRE Unlimited recorded the sharp increase in pretax profits as revenues increased by 36 per cent to €31.94 million. The directors state that “2018 witnessed excellent activity levels in the domestic commercial property market”.

Operating profits increased by 37 per cent to €4.1 million after paying out €27.8 million in administrative expenses.

The company recorded post-tax profits of €3.48 million after paying corporation tax of €622,647.

At the end of December 2018, the company’s shareholder funds stood at €16.67 million that included accumulated profits of €15.35 million.

The accounts disclosed at the end of December 2018, the company had capital commitments of €3 million associated with refurbishment of the company’s Dublin HQ at Connaught House.