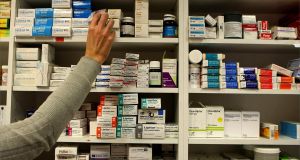 Lawyers acting for pharmaceutical giant AbbVie warned the Department of Finance it would be “unfair” to levy a €572 million tax bill on the company, arising from changes introduced in last year’s budget.

The reforms meant AbbVie faces paying tax on its $63 billion (€57.2 billion) acquisition of Dublin-domiciled Allergan, the drugmaker which makes botox.

Records released to The Irish Times show law firm Matheson contacted the Department of Finance multiple times after the budget, including making an offer to draft an amendment on the matter. It later sent a legal letter to the Chief State Solicitor’s Office.

Emails between Department of Finance officials show Matheson “raised concerns” the day after the budget. In another email exchange on the same day, an official said Matheson had “asked if the Minister was aware of the implications for that transaction and they could provide some drafting for a possible amendment if the Minister was open to considering same”.

On October 11th, 2019, an official emailed a summary of another call with the firm, writing that it told her they viewed the change “as retrospective legislation which is unfair”. The firm said the change “imposes a cost that hasn’t been proceed [sic] into the transaction”, and argued a transitional period should have been introduced.

After being told the “policy decision remains unchanged”, Matheson said it would “advise [AbbVie] of the position and they will have to consider their options”. The firm then wrote a legal letter to the Chief State Solicitor’s Office on November 1st, 2019.

That letter has not been released on grounds of legal privilege, but it is understood to contain a legal opinion commissioned by Abbvie. There is a possibility the firm could still challenge the budget move in the courts, although no case has been lodged as yet.

Previously, takeover deals structured as “schemes of arrangement” were exempt from the 1 per cent stamp duty on the sale of shares in Irish companies. Following the budget, the AbbVie-Allergan deal and other significant transactions became immediately liable for the tax.

Spokespersons for AbbVie, Allergan and the department had no comment. Matheson did not respond to a request for comment.