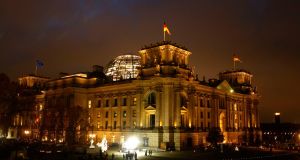 Germany’s Social Democratic Party is pressing for the German parliament, the Bundestag (above), to block Ireland’s plans for an early repayment of bailout loans totalling €5.5 billion. Photograph: Hannibal Hanschke/Reuters

After a starring role in the Paradise Papers, Ireland will next week face attempts in Berlin to extend its stay in financial purgatory.

Germany’s Social Democratic Party (SPD) is pressing for the German parliament, the Bundestag, to block Ireland’s plans for an early repayment of bailout loans totalling €5.5 billion.

“We won’t go along with this free pass for Ireland because we don’t want ongoing tax dumping in the EU,” said Mr Carsten Schneider, the SPD parliamentary party’s general secretary. “We’re not talking about Ireland’s 12.5 per cent tax rate here, but secret deals that reduce that tax burden to near zero.”

The Government estimates it can save €150 million in interest payments by refinancing the bailout loans in international debt markets.

The plan depends, however, on all European Union states agreeing to waive the right of two EU bailout facilities, which gave Ireland €40.2 billion during the crisis, to get early repayment at the same time. The loans in question comprise the remaining International Monetary Fund (IMF) bailout as well as bilateral loans from Denmark and Sweden.

The centre-left SPD – junior partner in the outgoing German government – is urging other parties to join it in voting against Ireland’s plan.

The SPD holds less than 22 per cent of the seats the Bundestag and there are no signs yet it is receiving wider support in the German parliament. Sources within Chancellor Merkel’s Christian Democratic Union (CDU), which together with its Christian Social Union (CSU) in Bavaria account for almost 35 per cent of the Bundestag, have indicated that the party was likely to back Ireland’s request.

German politicians have, however, taken note of Ireland’s starring role in the Paradise Papers, in particular reports of Dublin simultaneously closing one tax loophole and opening another for US multinationals.

Berlin politicians have also followed closely, with some amazement, Dublin’s reticence in accepting €13 billion of back taxes from Apple in what the European Commission claims amount to illegal State aid.

The Minister for Finance, Paschal Donohoe, said on Thursday night that he had noted the SPD position, and found it “disappointing”. He said he remained hopeful that the Bundestag would consent to the required waivers being granted, adding that Ireland remained in contact with German authorities.