Arguments around regional planning never seem to get us anywhere 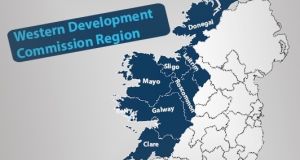 The Western Development Commission has published its submission on the Government’s Draft National Planning Framework, bemoaning the lack of focus on the western region

It would take a brave politician to face down the obvious anti-urban bias in Irish political culture; or to question whether throwing resources at certain regions represents value for money for the State; or perhaps the inevitable tide of urbanisation should be accommodated rather than endlessly, and perhaps fruitlessly, opposed.

Ireland’s lopsided economy is after all no different to Britain’s. London’s population continues to mushroom as populations in Manchester, Liverpool and Glasgow dwindle to levels not seen since the beginning of the 20th century.

Young people want to be in the cities; the current wave of foreign direct investment wants to be located in built up urban areas with housing,schools and transport – these are trends are beyond the gift of government policy to arrest. The fact that 30 per cent of the State’s investment in road, rail and other utilities is now concentrated in the Greater Dublin Area is merely a reflection of need, not pro-Dublin bias.

Yet the drum to arrest this process continues to beat louder. Yesterday, the Western Development Commission (WDC) published its submission on the Government’s Draft National Planning Framework, bemoaning the lack of focus on the Western Region.

In its submission, the WDC also says there is no information as to how the plan’s 70 “National Policy Objectives” will be implemented, enacted or put into policy. “The draft is in fact quite general and aspirational and the real detail is only in the target population growth and jobs growth and in details of planning mechanisms,” it said, which highlights a wider problem around planning in Ireland and one pinpointed by the International Monetary Fund (IMF) in a report yesterday.

The IMF said there were serious shortcomings in the planning of major infrastructural projects here combined with the lack of a coherent national strategy to deal with the current bottlenecks in housing, health, water and education. Perhaps this issue deserves more attention than the urban/regional divide.