Fall less severe than analyst forecasts, with underlying picture one of ‘steady growth’ 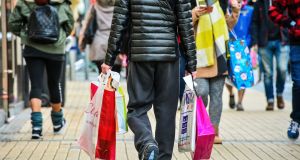 UK retail sales have recorded their first year-on-year fall since 2013.

Although the fall was less severe than analysts had expected, the official data showed a 0.3 per cent year-on-year dip in sales volumes – the biggest since March 2013. That partly reflected a very strong performance by retailers in October 2016 which distorted the comparison.

“We are continuing to see an underlying picture of steady growth in retail sales, although this October suffered in comparison with a very strong October in 2016,” said Office of National Statistics statistician Kate Davies.

Mild weather also put shoppers off buying winter clothes, underscoring weakness in the figures. But volumes were still far lower that they were before the June, 2016, Brexit vote hit sterling and pushed up inflation. Looking at the three months to October, which smooths out monthly volatility in the data, sales growth picked up to 0.9 per cent from 0.7 per cent in the three months to September.

This meant sales volumes in the three months to October were just 1.1 per cent higher than the year before, the weakest growth rate since May, 2013. Sterling rose slightly after the data and British government bond prices edged down as the sales figures came in less weak than suggested by a series of other surveys of retailers.

“This is in stark contrast to the survey data which were pointing to an absolute bloodbath,” said Alan Clarke, an economist with Scotiabank, said. “Things are probably as bad as they are going to get, so I’d be hesitant to extrapolate the downward trend too far,” he added.

“Next year should be a better year as lower inflation and firmer wages reverse this year’s downwards trend.”