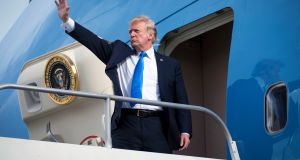 President Donald Trump: will make a rare trip on Friday to the US Congress to press the case for tax reform. Photograph: Doug Mills/New York Times

Paschal Donohoe’s first trip to Washington as Minister for Finance coincided with a key week for US tax reform. As the Minister sought to highlight the benefits of free trade and the two-way nature of Irish-American investment during meetings with companies and political figures in Washington, US politicians were ironing out the final details of what may be the biggest changes to the US tax system in decades.

Donald Trump is due to make a rare trip on Friday to the US Congress to press the case for tax reform, as Republicans try to secure results ahead of next week’s Thanksgiving recess.

The House of Representatives is expected to vote on its 446-page Tax Cuts and Jobs Act as early as Thursday; the Senate vote is expected later.

The Senate threw a curve-ball into the debate late on Tuesday by announcing changes to their proposal. They suggested that all individual tax cuts will expire in 2025, thereby allowing them to sidestep budget rules that prohibit tax bills from adding to the deficit over 10 years. More controversially, Republicans also tacked on a change to Obamacare by proposing the removal of the “individual mandate” – the rule that all Americans must have health insurance.

Removing this provision will lead to $338 billion in savings over a decade, Republicans believe, but will also leave 13 million people without insurance.

By introducing the emotive issue of healthcare into the Bill on tax reform, Republican senators risk the wrath not only of some of their constituents but also their own senators.

With a wafer-thin majority – they control 52 seats in the 100-seat Senate – the Republican leadership needs to keep its party on board. It’s only a few months since Senator John McCain dramatically scuppered his own party’s healthcare proposal by voting against a Bill in a late-night senate session.

The US plan for tax reform may be reaching a critical juncture, but negotiations about its final shape are far from over.