EIB to sign off on €85m investment loan for Limerick 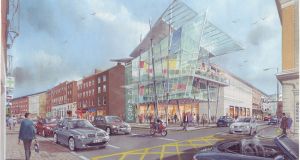 Plans for the redevelopment of the Opera Centre site in Limerick city.

The European Investment Bank (EIB) is to sign off on a €85 million loan to Limerick City and County Council on Thursday, to transform a 3.7 acre site in Limerick city centre “into one of the country’s top urban office developments”, creating 3,000 jobs.

Sources confirmed the loan is “the largest-ever EIB support for urban investment in Ireland”.

The EIB deal is specifically to develop the Opera Centre site, located at the northern edge of the city’s core commercial district.

The site comprises part of an existing urban block.

The plans for the site, named “Project Opera”, propose creating a mixed-use development with both public- and private-sector office uses and some small-scale retail, which may also include a residential element.

A new public square is to be provided as part of the development, with pedestrian links to adjacent city streets. The completed development is projected to accommodate approximately 550,000sq ft of building accommodation, subject to planning.

EIB vice-president Andrew McDowell will visit Limerick on Thursday to officially sign contracts for the loan at the council’s city headquarters.

The Opera site was once valued at more than €100 million at the height of the boom. Following the economic crash, the council purchased it for €12 million in 2011.

The loan for the Opera site is being seen as a major advantage for Limerick over Cork and Galway in attracting foreign investment.

A source said: “It is a big deal, and, a real thumbs up for Limerick from the EIB. It gives us massive credibility. The EIB don’t give out money lightly — they only back solid long-term investments.

“It’s a real vote of confidence in the city. Limerick is the fastest-growing Irish region outside of Dublin for foreign direct investment.”