Women and immigrants gain most from minimum wage 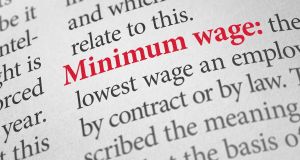 “Seventeen years on, because the minimum wage is set at an appropriate level, its introduction in Ireland has had few negative labour-market impacts.” Photograph: Getty Images/iStockphoto

The proposal in the late 1990s to introduce a national minimum wage was seen by some as unnecessary as the social welfare system already set a floor on wages. If people were better off unemployed at a given wage, employers would have to pay more to attract workers.

There was also a concern that such additional regulation of the labour market could significantly damage employment and, possibly, competitiveness. Finally, OECD research had raised concerns that paying all workers, irrespective of age, the same statutory minimum wages would incentivise early school-leaving.

On the other hand, it was argued that the welfare system offered insufficient safeguards against low wages. In practice, many continued to work even though they might have been better off unemployed.

In addition, with declining unionisation, especially in sectors with low pay, there was a concern that people in a weak bargaining position could be exploited. This was particularly the case for immigrants who might have limited access to the welfare system.

Prior to its introduction, two detailed studies were undertaken by the Economic and Social Research Institute to understand the labour market implications of the new minimum wage. Findings for other countries, such as the United States, had been inconclusive as to whether such a policy negatively affected employment.

The initial ESRI study (1998) had suggested up to 23 per cent might be below the proposed minimum wage. However, by 2000, given strong overall wage growth, this estimate had dropped to 14 per cent.

In line with experience in other countries, these ESRI studies showed that women and part-timers were the main beneficiaries of a minimum wage. Sixteen per cent of part-time women workers were on the minimum wage in 2003, more than three times the rate for workers generally.

During the financial crisis, the troika raised the issue of reducing the minimum wage. However, in the light of the evidence from research on the impact of the minimum wage, no change was made.

The ESRI has just published updated research which shows the proportion of employees on the adult minimum wage in 2014 was just under 5 per cent, the same as it had been a decade earlier, and lower than the 8 per cent rate in the UK.

Again, the recent study confirmed that a higher proportion of women work at the minimum wage. They now account for about three-quarters of minimum-wage workers. This is strongly linked to part-time work, and to women’s employment in particular low-wage areas in services.

The high rate of part-time work by women partly reflects the problems sourcing satisfactory childcare at a reasonable price, and results in many women accepting low-wage part-time employment.

The share of foreign-national workers on the minimum wage, at 9 per cent, is twice that of Irish employees. Workers from abroad, particularly in low-pay sectors, are likely to be in a weaker bargaining position than Irish people, and may enjoy fewer rights to social welfare benefits as a fall-back. The minimum wage clearly plays a valuable role in protecting vulnerable immigrant workers, which is an important justification for it.

In line with other studies in Ireland and elsewhere, the recent research confirms that low pay does not necessarily equate to low household income. It shows that 30 per cent of low-wage employees are from deprived households, meaning 70 per cent are not.

So increases in the minimum wage will also benefit a large number of people who are not from economically disadvantaged households, and the increases in disposable income that result are mainly in the upper half of the household income distribution. This means that, as in the UK, changes in the minimum wage are not an effective means of tackling poverty in Ireland; household poverty is more a problem of joblessness than of low pay.

Seventeen years on, because the minimum wage is set at an appropriate level, its introduction in Ireland has had few negative labour-market impacts, proving the Cassandras wrong, and it provides significant protection to immigrant workers.

However, tackling joblessness and providing a decent welfare system are the appropriate policy tools to tackle poverty.