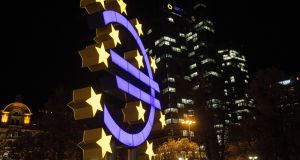 Macro-prudential buffers are designed to protect the wider economy against a banking failure. Photograph: Bloomberg

Permanent TSB, which has reduced the size of its loan book, will not have to hold an extra buffer of capital from 2019 because it is no longer large enough to be considered a systemically important bank, according to the Central Bank.

Announcing the results of a review of its macro-prudential buffers, the capital requirements imposed on banks to ensure their resilience to economic and financial shocks, the Central Bank said Permanent TSB would no longer be included in the six-strong list of systemic institutions requiring additional buffers due to its reduced size.

Instead six financial institutions – Bank of Ireland, AIB, Citibank, Ulster Bank, Unicredit and DePfa – would now be required to set aside a capital buffer in addition to other minimum capital requirements.

The Central Bank said the associated buffers have not changed from the previous review in 2016.

The review did, however, suggest the buffer applied to Citibank Holdings was to be increased to 1 per cent due to its increased importance.

The regulations on macro-prudential buffers come into force in 2015 as part of the European effort to prevent another credit boom and to fortify the wider economy against any failure of systemically-important banks.