France shows gender quotas work in business while targets do not

Thanks to 2011 law, 44 per cent of seats on company boards are now held by women 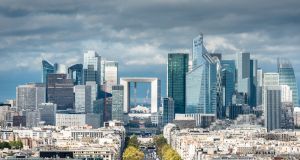 A discussion on gender quotas at the Irish Embassy in France’s seminar on women in business concluded that quotas work, targets don’t.

In France, the 2011 Copé-Zimmermann law required companies to have at least 40 per cent of women on their boards by 2020. Thanks to the law, 44 per cent of seats on company boards are now held by women.

The law succeeded because companies who did not comply were not allowed to compensate board members, said former French cabinet minister and head of Korelya Capital, Fleur Pellerin.

“Unfortunately, once you move out of the area where quotas are applied, the number of women falls away,” said Orla Noonan, chairman of the board of directors of the Scandinavian digital marketplace Adevinta. “At management level, the percentage of women falls back to just 18 per cent.” There are only two women chief executives at France’s top 40 companies.

France is likely to enact more gender quotas. A recent report by the French high council for equality recommended that quotas be extended to senior management.

The Irish government Balance for Better Business initiative set a target – not a quota – of 33 per cent women board members by 2025. “The stick is that companies will be reported on and it will be published,” said Sheelagh Daly, entrepreneur manager for Enterprise Ireland. Some 30 per cent of Irish companies still have no women on their boards, Daly added.

“I am disappointed that we only went for targets, not quotas,” said Margot Slattery, former boss of Sodexo Ireland, now head of global diversity and inclusion for the multinational food service and facilities management company.

“Quotas are unpleasant,” Noonan admitted. “Women already on boards felt the law was undermining their achievements. Newly-appointed women felt it implied their place wasn’t merited, that they hadn’t earned it. But it was the only way to do it.”