Duo thought to be preparing surveillance of world leaders at conference 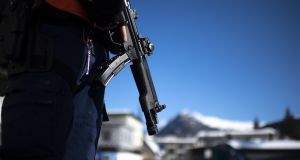 Russian plumbers do not tend to summer in Davos. Even those with diplomatic passports.

Five months before world leaders began their pilgrimage to the annual World Economic Forum this week – among them US president Donald Trump – Swiss police interrupted what reports on Tuesday claimed were the beginnings of a Russian spying operation in the secluded Alpine town.

Alerted to their unusually long stay in the high-end resort, police picked up two Russian men in Davos in August, the Graubünden cantonal police department has confirmed.

The men claimed diplomatic protections, but had not been registered as official diplomats with Bern, the police said.

No indications of criminal acts were found at the time, the police added.

According to Zürich’s Tages-Anzeiger newspaper, which carried a detailed report of the incident, police and Swiss federal officials suspected the pair of being Russian intelligence agents, posing as tradesmen in order to install surveillance equipment at key facilities around the town to monitor the private conversations of the world’s powerful and wealthy during the World Economic Forum on behalf of the Kremlin.

The Russian embassy in Bern did not respond to a request for comment.

Though many may doubt how much actionable intelligence even the most subtle of agents could lift from the World Economic Forum, the gathering is nevertheless a rare concentration of global power and influence that is tempting to spymasters.

Alongside Mr Trump and his retinue – among them his daughter Ivanka and her husband Jared Kushner – other leaders of potential interest to the Kremlin attending this year include the president of the European Commission Ursula von der Leyen, Ukraine’s president Volodymyr Zelensky and Hong Kong’s chief executive Carrie Lam, not to mention hundreds of chief executives and senior government officials.

Attendees spend tens of millions on their personal security at Davos. The total costs for Mr Trump – who gave the conference’s keynote speech on Tuesday – are not fully broken down, due to their classified nature. But some disclosures give a sense of their scale: the cost of car rental alone for officials from the White House Communications Agency – who ensure the integrity and encryption of presidential communications – will be $266,000 (€239,000) for the two-day trip.

Switzerland’s security services have been particularly jumpy about increased Russian intelligence activity in the country in recent years. While Switzerland has long been a playground for Russia’s wealthy émigrés, more recent reports have identified the state – by long tradition a diplomatically neutral no man’s land, at the heart of Europe – as a hub of Russian intrigue.

The Swiss Federal Intelligence Service concluded in a 2018 report that one in four Russian diplomats based in Switzerland was a spy.

Since 2017, an inquiry by the Swiss attorney-general has been investigating a huge Russian spying organisation against the World Anti-Doping Agency and other sporting bodies, including the Court of Arbitration for Sport, based in Lausanne.

Russia’s feared military intelligence directorate, the GRU, has been particularly active in the country: as well as hitting WADA, agents it sent to target the Organisation for the Prohibition of Chemical Weapons in The Hague were working from Swiss bases in 2018.

The open-source investigative website Bellingcat has showed that Switzerland was a key liaison ground for GRU operatives responsible for the attempted assassination of Sergei Skripal – and the inadvertent killing of Dawn Sturgess – in Britain in March 2018 using the lethal nerve agent novichok.

The two principal suspects in the incident – Alexander Petrov and Ruslan Boshirov – claimed to run a sports nutrition business and said the six trips they had made to Geneva immediately before the assassination attempt in Salisbury were in order to relax.