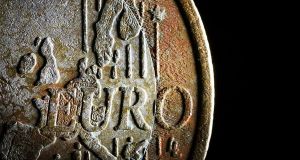 The euro zone ended last year with a whimper, as the French and Italian economies both shrank unexpectedly, denting hopes that the region was poised to rebound from its recent sluggish performance.

The declines in the second and third largest economies in the euro zone, which surprised most economists, dragged growth in the single currency zone to only 0.1 per cent in the fourth quarter - below expectations of 0.2 per cent.

Economists said the grim news would make the European Central Bank more likely to loosen monetary policy further later this year, despite an uptick in inflation in January due to rising energy and food prices.

“The spectre of recession is back,” said Christoph Weil, economist at Commerzbank. “Economic growth in the euro zone came to a virtual standstill at the end of the year. . . The ECB is likely to view this with concern.”

Consumer prices in the euro zone increased 1.4 per cent in January, up from 1.3 per cent the previous month, but still below the ECB’s inflation target of close to 2 per cent. The main driver of inflation was higher prices for energy and food, alcohol and tobacco. Excluding those, core inflation fell from 1.3 to 1.1 per cent.

“This underlines our forecast that the ECB will eventually be forced to loosen policy further, perhaps in the second half of the year,” said Jack Allen-Reynolds, senior Europe economist at Capital Economics. He predicted core inflation would be about 1 per cent this year.

The contraction of the French economy in the final months of last year came amid disruption from protests and strikes over pension reform, which have since eased. But the decline is still a blow for president Emmanuel Macron’s push to make the country more dynamic and business-friendly.

The 0.1 per cent decline in the euro zone’s second-biggest economy in the final three months of last year was below expectations and represented a sharp slowdown from 0.3 per cent growth in the previous quarter.

Bruno Le Maire, French finance minister, said the weak data reflected disruptions to ports, railways and fuel distribution during the strikes and protests. He pointed to resilience in consumer spending and business investment.

“This temporary slowdown does not call into question the fundamentals of French growth, which are solid,” said Mr Le Maire in a statement on Friday. “We are nonetheless particularly vigilant of international uncertainties.”

The French economy has faced the threat of extra tariffs by the US government on exports such as wine and cheese, which were narrowly averted after talks between the two countries last week.

The main factor behind the decline in the economy was a major rundown of companies’ inventories, which knocked 0.4 per cent off the gross domestic product figures. Household spending and corporate investment both slowed.

The Italian economy fared even worse, shrinking by 0.3 per cent in the fourth quarter, against expectations for growth of 0.1 per cent. That was the biggest quarterly fall in the size of the economy since the first quarter of 2013.

The Italian statistics agency said that companies running down their inventories more than offset a rise in exports in the period which also had two fewer working days than the previous quarter.

Gloomy news from France and Italy contrasts with a more upbeat forecast this week by Germany and a positive tone by the ECB, which said last week that risks to the euro zone had become somewhat “less pronounced”.

The one bright spot in the euro zone was Spain, which grew by 0.5 per cent in the fourth quarter, up from 0.4 per cent in the previous two quarters. However, for the full year, Spanish growth was 2 per cent - its lowest rate for five years.

Since hitting a high of 3.8 per cent in 2015 in the aftermath of Spain’s savage economic crisis, the country’s growth has steadily declined in each of the subsequent years while remaining above the euro zone average. – Copyright The Financial Times Limited 2020