Election 2020: In the scale of campaigning priorities, climate change is the loser

John FitzGerald: It’s much easier in election mode to offer more cash for health or housing than to try to save the planet 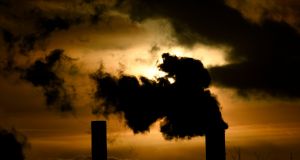 While polls over the last year have shown an increased interest in tackling climate change, this appears to have evaporated now that an election is under way. Photograph: Getty Images

After the 1977 election and before the new Fianna Fáíl government was formed, I travelled to Brussels with a senior Department of Finance colleague. On the plane my colleague met Martin O’Donoghue, one of the architects of the Fianna Fáil manifesto.

Over a beer in the Grand Place, Martin acknowledged that the election manifesto was too costly, partly because of additions to what he had originally proposed. When he was appointed minister for economic planning a few days later, I hoped that reality would prevail. Instead the government tried to implement all its extravagant promises, resulting in an economic crisis that blighted the 1980s.

During elections people often complain that politicians don’t honour their election promises. The reality is that implementing such promises has too often cost us dearly. If election promises had stayed as general statements of priorities, tempered by economic reality, Ireland would have had a much easier economic ride.

In the last election staying within fiscal limits was acknowledged as important. All the five main parties set out manifestos which claimed to come within the fiscal envelope proposed by the Fiscal Advisory Council, even if, in practice, most contained commitments which exceeded those limits.

This time round the real fiscal constraints have been largely ignored. The Fiscal Council estimates that there is about €11 billion of uncommitted resources available for the next government, but about half of that will be needed to fund demographic pressures and essential capital spending. Our population is set to grow by 2 million over the next 30 years, and the numbers aged over 65 will roughly triple: this will necessitate a continuing increase in expenditure.

In this election only Fine Gael has set its manifesto within an explicit budgetary framework, but it underprovides for population change and for inflation.

Fianna Fáil commits to staying within prescribed fiscal limits, but offers little detail on how its programme can be funded.

Sinn Féin is planning to spend an exceptional €22 billion.

Like Fianna Fáil, the Greens and Labour give little detail on how they would fund manifesto commitments.

Across the board the manifestos contain many detailed and expensive undertakings but, given information overload, many voters will be unaware of the competing offers. Thus an exceptional scale of promises may threaten fiscal stability without even electoral rationale or payoff.

Where manifestos can have value is in expressing a party’s priorities for the next five years, and offering a starting point for interparty negotiations on forming a government.

While polls over the last year have shown an increased interest in tackling climate change, this appears to have evaporated now that an election is under way

The new programme for government will be a compromise, drawing on individual commitments made by the constituent groupings. However, it is hoped that in the negotiation process there will a dramatic revision of the scale of commitments to stay within what can be afforded.

In the 2016 election climate change received little attention, with the exception of the Greens and the Labour Party. Sinn Féin did not mention the problem. This time round all parties give the climate crisis more attention.

Fine Gael includes in its manifesto more detail on the policies outlined in the Government’s Climate Action Plan. The Greens and Fianna Fáíl plan greater investment in public transport.

Fine Gael and Fianna Fáil provide more details on how they would ensure a transition to electric cars, while the Greens give this policy strand less attention.

Fine Gael, Fianna Fáil, Labour and the Greens all endorse the Oireachtas Committee on Climate Change’s recommendations, in particular that there should be a steady increase in carbon tax to €80 a tonne by 2030; the Greens would move more rapidly to €100 a tonne.

While polls over the last year have shown an increased interest in tackling climate change, this appears to have evaporated now that an election is under way.

In the public debate to date, hardly any attention is being paid to this vital challenge. Maybe that’s not surprising. Effective action requires hard decisions that could raise costs for households and businesses in the short run until systems, vehicles and behaviours adapt.

It’s much more tempting in election mode to offer more cash for health or ending the housing shortage, than to sell tough decisions towards saving the planet. In the scale of campaigning priorities, climate change is the loser.