Seen and heard: Reports of multimillion euro data centres for Drogheda and Arklow 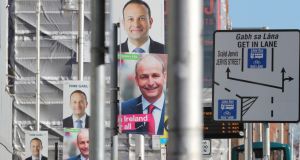 Fine Gael has plummeted to its lowest ever rating in the Sunday Times Behaviour & Attitudes polling series, falling seven points in a month to 20%, while Fianna Fáil is up 5% to 32%.

The election dominates the news coverage in most of the media. The Business Post says that Fianna Fáil will propose a split between public spending and tax cuts of at least three to one, promising voters small cuts in next year’s budget if elected and greater emphasis on increasing spending on housing and the health service.

The Sunday Independent, meanwhile, says Fianna Fáil is pledging to give first-time buyers €1 for every €3 they save for a mortgage. The new SSIA-style savings scheme would be capped at €10,000 per person and run in conjunction with the Help to Buy scheme, which the party would expand to allow homeowners claim up to €25,000 from the State off the cost of a new house.

The moves come as an opinion poll taken just before the election was called last week showed Fine Gael has plummeted to its lowest ever rating in the Sunday Times Behaviour & Attitudes polling series, falling seven points in a month to 20 per cent, while Fianna Fáil is up five to 32 per cent at the outset of the election.

In other news, Dublin City Council has launched a fresh bid to introduced a hotel bed tax, likely to be a proportion of hotel room rates rather than a flat fee, according to the Sunday Times. The paper also reports that the owners of Dublin city centre car parks have objected to the Liffey Cycle Route and say that if it goes ahead they should be compensated for loss of earnings.

The Government is to place RTÉ under an “active ownership” regime, including a strict new reporting structure to ensure progress is made on plans to cut staff numbers and reduce high earners’ wages, reports the Business Post.

Revenue is pursuing Japanese pharma giant Takeda for almost €400 million in taxes, reports the Sunday Times. It relates to a historical transaction involving Dublin-based drug group Shire, acquired by Takeda a year ago. Separately, the paper also reports that Irish author Sebastian Barry has been refused a tax refund on a £25,000 (€30,000) prize he won for his historic fiction novel, On Canaan’s Side.

Irish-owned Echelon Data Centres has agreed to purchase a site at the Kish Business Park in Arklow in an investment estimated to be about €500 million, according to the Sunday Independent. Meanwhile, the Sunday Times reports that Amazon has picked Drogheda as the location for its latest data centre, with an expected investment of up to €360 million.

In his column in the Business Post this week, Matt Cooper asks if the State should sell or keep its 70 per cent stake in AIB. “The next government must make some big decisions about how much it wants to be involved with a bank that has ongoing issues with overcharging and profitability.”

Magnet Networks has secured the first contract to deliver business broadband over Siro’s network across Ireland, according to the Business Post. Siro reaches 242,000 premises across Ireland. Approximately 36,000 of these are businesses.