Unemployment rate unchanged at 5.4% in April

Figures from Central Statistics Office show there were 129,700 unemployed in April 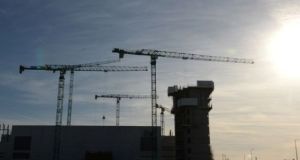 The youth unemployment rate stood at 12.8 per cent in April, as against 13.5 per cent in the previous month

The unemployment rate was unchanged in April at 5.4 per cent, and down from 5.9 per cent for the same month a year earlier, new figures show.

According to the latest figures, there were 10,200 fewer people unemployed in April compared to the same month in 2018.

The seasonally adjusted unemployment rate was 5.2 per cent in April, down from 5.4 per cent in the preceding month and from 6 per cent a year ago.

The youth unemployment rate stood at 12.8 per cent in April, as against 13.5 per cent in the previous month.

“The rate of unemployment was stable at 5.4 per cent in April, but is expected to continue its downward trend through the course of the rest of the year. This will be good news for those without a job or looking to move to a new role. It’s more challenging for companies recruiting, who will struggle to find top talent, and may find themselves under pressure to pay more to attract new recruits,” said Pawel Adrjan, economist at job site Indeed.