Brexit explained: What would a no-deal Brexit mean?

Donald Tusk has warned a no-deal Brexit is‘more likely than ever.’ But if it happens it could be chaotic

Steve Bray has become known for standing outside the British parliament every day it is in session, waving banners and screaming "stop Brexit" at lawmakers. Video: Reuters 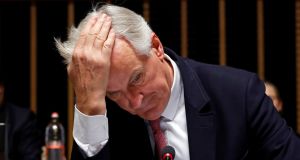 What is a no-deal Brexit?

A no-deal Brexit is the term used to describe what happens if the UK leaves the European Union without concluding a withdrawal agreement. The EU and the UK have agreed a draft of this withdrawal agreement, but Theresa May faces big problems getting approval from the House of Commons for it.  For this reason Ireland and the other EU states are stepping up their planning for a no-deal situation.

If the withdrawal agreement is signed, then a transition period starts when the UK leaves the EU. The UK is set to leave the EU on October 31s, 2019 unless Theresa May's agreement is approved by parliament before that. It was originally due to leave on March 29th, 2019.

The transition is a kind of stand-still when most things remain as they are now until December 2020, at least – and possibly until December 2022    to allow negotiations of the future relationship between the EU and UK to take place.

However, if the UK leaves without a withdrawal agreement being signed, then there will be no transition period and the UK will crash out of the EU, with all current trading and regulatory links with the EU ending immediately as it departs. This could be chaotic and carry a considerable risk for Ireland as well as for the UK itself.

So what would this mean?

The UK currently trades with the EU under rules set down by the EU customs union, which is an agreement that goods can be traded freely, and the single market, which sets a common regulatory structure and allows the free movement of goods, capital, people and services.

Leaving these two arrangements overnight would, first, mean the UK would trade with the EU on the basis of rules set down by the World Trade Organisation (WTO). This would end the free movement of goods between the UK and the EU, including between the UK and Ireland, and mean that tariffs, or special import taxes, would apply on some products. Customs checks would also be immediately needed between countries.

The end of common regulation between the EU and UK would also affect many sectors, such as aviation, pharmaceuticals, food and on and on. This could disrupt trade and business in the short term, as new arrangements are put in place, and in the long term would require further checks at or near borders.

There are plenty of examples. Looking at business, exports to and imports from the UK would immediately be affected as the EU regime would be replaced by WTO rules. Some 12 per cent of our goods exports go to the UK, but the figure rises to around 40 per cent in the food sector. These goods would be subject to immediate new bureaucracy and checks – and possibly disruptive delays. Tariffs, special taxes imposed on goods entering a country, would also apply and would be particularly damaging for food exports.

As well as goods going to the UK market, around two thirds of Irish exports to the Continent go over the UK  landbridge. These could face four new checks – leaving Ireland, entering and leaving the UK and entering Continental ports. There is growing concerns of chaos and long delays at UK ports in particular which could delay delivery and be a particular problem for fresh and time sensitive products.

The beef sector, where more than half of all exports go to the UK, would be particularly exposed to a hard Brexit as tariffs of 50 per cent or more of their value would apply to many beef products, effectively pricing many Irish exports out of the UK market. Producers would seek other markets and some will operate from within the UK. But this would lead to lower exports, job losses and lower prices for farmers

Goods imported to Ireland would also be affected. Around 23 per cent of Irish imports come from the UK and many businesses, notably in pharma and chemicals, would see their supply chains disrupted.

There are also issues for consumers, with two thirds of the products on our supermarket shelves either coming from the UK, or moving via the UK landbridge to Ireland, according to a paper for the Institute for International and European Affairs by economists John FitzGerald and Edgar Morgenroth.

Big supermarkets typically bring products in here from distribution centres in the UK covering the UK and Ireland, but a no-deal Brexit – or even trade barriers after an organised Brexit – may make this impossible, as a whole range of checks would potentially be needed on all the different products.

In the short-term, a no-deal Brexit could threaten disruption to some supplies on our shelves. In the longer term it could shake up the sector, leading to changes in the mix of products and higher prices. An ESRI study estimated that a hard Brexit could push up prices here by 2 to 3 per cent, increasing the average annual shopping bills for consumers by between €892 and €1,360. A no-deal exit would see these costs potentially start to accrue quickly.

Is there more? What about talk of planes not taking off?

There is plenty more. Aviation is, indeed, one example. At the moment the UK aircraft industry operates under EU regulation both within the EU and for flights to other countries such as the US. If the UK leaves suddenly next April, some new regulatory arrangement would be needed.

The European Commission has outlined temporary measures which should keep planes flying in the short term, but disruption cannot be ruled out.

Likewise in highly regulated sectors like pharma and medical devices companies are having to review all their supply chains and regulatory approvals – and in some cases increase stocks held in Ireland – to make sure there will  be no  interruption to supply in the case of a no deal Brexit.

Surely all this can be avoided, even if there is no deal?

Some of it, possibly. Certainly planning might allow some fixes in terms of regulation. But neither side can change the rules of international trade.

The only other way out would be for both sides to take a deep breath and agree that the UK could take longer to exit the UK than previously planned. This would be possible, but only if the UK and all the remaining 27 EU member states agreed.

Is there any way of calculating the damage to our economy?

The Department of Finance calculated that a hard version of Brexit could lead to Irish GDP being 4.5 per cent lower in ten years time with a loss of 40,000 jobs.

However this was done on the basis that there would be a transition deal. Another study commissioned by the Government from Copenhagen Economics, a consultancy firm, estimated that GDP could be 7 per cent lower by 2030 in the event of a hard Brexit.

A no-deal Brexit, by bringing all the changes into a short timeframe, risks also ensuring that more of the costs come in the early years. In particular, if the UK crashes out it would hit growth and threaten a significant hit to existing economic and tax forecasts.

What about the Irish Border?

Taoiseach Leo Vardakar has said the Government “would not countenance a return of a Border on the island under any circumstances.”

However in a no-deal Brexit, many experts believe it would have no option but to reimpose a border, to conduct checks on goods entering the EU market and, crucially, control smuggling.  The Government and the European Commission have been discussing this issue although it is still not clear what would happen in the event of a no-deal Brexit.