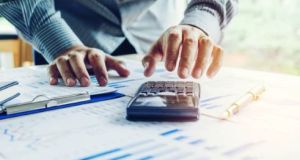 Assuming the revenue windfall is temporary, which is still open to debate, the analysis suggests the Government could generate bigger budgetary surpluses by saving the money, which could then be used to pay down debt or build up fiscal resources for use in a future downturn. File photograph: iStockPhoto

The Government’s finances have been boosted by up to €7 billion in the last four years, because of surging tax receipts and lower interest rate repayments on the national debt, the Central Bank has said.

It equates to about €1.7 billion a year and is effectively a financial windfall, according to the bank, which has published the details in an economics letter. This is because the revenue is over and above what the Department of Finance had expected for the four-year period.

The letter considers the implications of spending or saving such windfall gains and the dangers of tying them to permanent increases in Government expenditure.

Assuming the revenue windfall is temporary, which is still open to debate, the analysis suggests the Government could generate bigger budgetary surpluses by saving the money, which could then be used to pay down debt or build up fiscal resources for use in a future downturn.

Alternatively the Government could spend the windfall, providing a temporary boost to output and employment.

A €1.7 billion boost to annual Government spending over a three-year period would lift economic output in the domestic economy by 2.5 per cent compared to a baseline, it said.

On the downside, this would also exert some upward pressure on wages and result in a small decline in output in the traded or export sector of the Irish economy.

The study also examined the potential pitfalls of using such windfall revenues to bolster Government spending when the economy is close to full employment or at full capacity, which in the Republic equates to 5 per cent level of unemployment. Currently it is at 5.4 per cent.

In this case, wages would be bid up significantly, resulting in a loss of competitiveness and subsequent loss of output, particularly in the traded sector, which is one of the main driving forces of Irish economic growth.

“If the economy is close to full employment, an increase in Government expenditure could lead to a crowding out of private sector activity. Accordingly, the net assessment of whether to spend windfall revenues should be revised once the economy hits capacity limits,” it said.

“ An alternative to spending fiscal windfalls is to save them in order to build up fiscal buffers,” it said.

“Our analysis points to several potential advantages of such an approach. Larger fiscal buffers would help to reduce Ireland’s high public debt and would lessen the exposure of the public finances to negative shocks,” the analysis said.

While the letter does not assess what has been done to date with the windfall gains from tax and other revenue, the Irish Fiscal Advisory Council last year launched a stinging attack on the Government, claiming it was using bumper corporation tax receipts to paper over cracks in its spending plans and that it was failing to manage the public finances in a prudent manner.

He also warned that failing to run sufficient budgetary surpluses when times were good “may limit the ability of the Government to offset adverse cyclical or structural shocks”.