Loss would be incurred due to OECD reform process 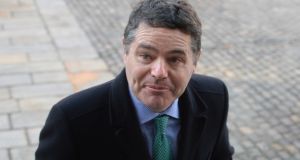 Minister for Finance Paschal Donohoe told the conference the department was concluding work to help forecast and plan the collection of corporation tax in future.

International tax reform could cost the State €2-€3 billion in annual corporate tax revenues in the years ahead, according to a range of estimates presented at a Department of Finance policy conference yesterday.

The estimates, presented by international tax experts from PwC and the International Monetary Fund (IMF), relate largely to changes expected to emerge from an Organisation for Economic Cooperation and Development (OECD) reform process due to conclude next year.

To combat tax avoidance by major multinationals, the OECD is looking at fundamental issues such as where profits are subject to tax, along with how corporate tax should handle digital business.

While the outcome is still not clear, it looks likely that more tax will be collected in major markets where companies have most of their sales, and less in countries like Ireland, where they have their international headquarters.

A study by consultancy firm Copenhagen Economics on the possible implications of this for the Nordic countries estimated that about 20 per cent of their corporate tax base could be exposed if one of the OECD reforms goes ahead.

On the same basis, the changes in the pipeline could cost the Republic €2 billion – or about one-fifth – of annual corporate tax revenue, according to Edwin Visser, a tax partner at PwC Netherlands. He also warned that, depending on how the reform programme played out, it could lessen Ireland’s competitive edge in attracting new investment in the years ahead, a possibly more serious economic impact.

Ireland collected a record amount – more than €10 billion – in corporate tax last year, with receipts having soared from €4.4 billion in 2014. A succession of international agencies like the IMF and domestic bodies like the Irish Fiscal Advisory Council, the ESRI and, most recently, the Central Bank have warned the Government to be cautious in allocating these revenues.

Speaking at the conference, Erik de Vrijer, assistant director at the European department at the IMF, said its estimates were that international tax changes and Ireland’s exposure to multinational decisions meant that about €1.5-€3 billion of Ireland’s corporate tax revenue could be judged to be “ at risk”. He said this was in line with what the Department of Finance had built into its estimates.

Repeating the latest advice from the Central Bank, the IMF believes Ireland should be careful not to build temporary revenue gains into permanent spending commitments.

The IMF, currently undertaking its annual mission to Ireland, is also repeating its call on Ireland to widen its tax base via establishing the local property tax on a sounder basis and reversing reductions of the USC and personal income tax.

Minister for Finance Paschal Donohoe told the conference that the department was concluding work to help forecast and plan the collection of corporation tax in future.

The department was also looking at how to keep the budget in surplus while at the same time maintaining investment levels across the economy, he said.