Cantillon: China-EU summit gains extra dimension as US presses on with trade tariffs 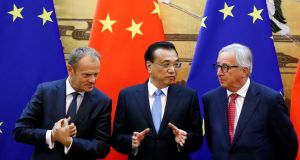 Normally a fairly low-key event, this year’s annual China-EU summit has taken on an explosive dimension against a backdrop of unprecedented rancour between the US and much of the rest of the world.

As fears grow that Donald Trump will spark a global trade war, Chinese and EU leaders are learning the wisdom of the old saying “my enemy’s friend is my enemy, my enemy’s enemy is my friend” during an Asian roadshow.

Trump recently announced a $200 billion (€172 billion) sanctions package targeting China over trade abuses and has warned he could ratchet this up to over $500 billion worth of Chinese goods – nearly the total amount of US imports from there last year.

He has also taken aim at the EU, describing the bloc as a “foe” and putting the EU ahead of Russia and China in his list of enemies.

For the time being, the EU seems happy to paper over its own issues with Beijing’s restrictive market practices, such as steel dumping and other cheap Chinese imports.

The trade war gives Europe leverage in its dealings with China and European Commission president Jean-Claude Juncker has used the opportunity to call for more meaningful reform.

During a joint news briefing with premier Li Keqiang and European Council president Donald Tusk in the Great Hall of the People, Juncker said there was a need for new rules in the areas of industrial subsidies, intellectual property and forced technology transfers and the reduction of trade costs, as well as a new approach to development and more effective dispute settlement.

The question is this: will Europe have the resolve to really push for reforms? China is cunningly wooing Europe with major deals, such as a $10 billion petrochemicals project by Germany’s BASF.

China is keen to build a European counterbalance to US tariffs, which have apparently already started to bite as the Chinese economy grew 6.7 per cent in the second quarter from a year earlier, its slowest pace in two years.

Tusk and Juncker will also be aiming to show a united front in Tokyo, where prime minister Shinzo Abe’s government has described US tariffs as “extremely deplorable” and the EU will sign a landmark free trade deal with Japan.