John FitzGerald: Migration is still central to the Irish experience

CSO provides estimates of future population depending on different assumptions about fertility, life expectancy and migration 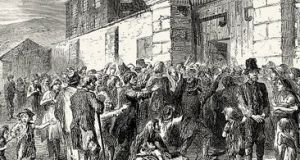 A scene outside a workhouse in Ireland during the Famine. One million people died and more than one million emigrated. Photograph: Getty Images

The greatest calamity to hit Ireland was the famine of the late 1840s. One million people died, more than one million emigrated, and the population in Ireland fell by over a quarter.

The tide of emigration established during the Famine years continued, with four million people emigrating in the course of the post-Famine century. So, in spite of a high birth rate, and a resulting high rate of natural increase, Ireland’s population continued to fall steadily, reaching its lowest point in 1961.

From a pre-Famine figure of 6.5 million in 1841, the population fell to 5.1 million in 1851 immediately after the Famine. By independence our population had sunk to about 3 million, and it hovered around that until reaching its lowest point in 1961, down to 2.8 million.

Since then, in spite of various economic hiccups, our population has grown steadily. But today’s population of 4.8 million is still somewhat off the immediate post-Famine level of 5.1 million.

The latest population forecasts from the CSO, which incorporate the findings of the 2016 Census, show Ireland’s population rising strongly over the next 35 years. Yet only their most optimistic forecasts suggest we will get back to pre-Famine levels, and then only by 2050. So it will have taken a full 200 years for Ireland’s population to recover fully from the Famine catastrophe.

Reaching that milestone will depend on continuing net immigration, which is highly sensitive to economic growth.

The CSO provides a range of estimates of future population depending on different assumptions about fertility, life expectancy and migration.

All the projections assume a continuing improvement in life expectancy, with life expectancy at birth rising to 88 from 83 for women and for men from 79 today to 86.

The CSO modelled two assumptions on fertility, one that women in Ireland will continue on average,to have 1.8 children, the other projecting a drop to the average EU level of 1.6.

The single biggest area of uncertainty is migration. In contrast to past forecasts, which adopted a base case of zero net migration, the latest CSO forecasts consider three possible levels of net immigration, ranging from 10,000 a year to 30,000. So combining the different assumptions gives six possible scenarios for the evolution of Ireland’s population over the next 35 years.

These forecasts are an essential input to planning future housing, health and education needs, but it is important to acknowledging there is a range of uncertainty depending on how migration, fertility and life expectancy will actually turn out.

Ireland’s first set of detailed population forecasts was published in 1935 by the eminent statistician Roy Geary, a subsequent director of the CSO. As the CSO does today, Geary provided a range of forecasts. His “high” forecast for 1996, 60 years after the date he published, was remarkably accurate, missing the actual figure of just over 3.6 million by under 20,000.

However, he also said that “it would appear that the population of An Saorstát is unlikely to exceed 3.7 million during the next 80 years,” that is, by 2016. The actual 2016 population, at 4.7 million, overshot the Geary forecast by a quarter.

Net outward migration resumed as the economy tanked, but has reversed once again as the economy recovers. However, even in the peak year for net inward migration, roughly 150,000 people came to or returned to Ireland, and almost 50,000 left. Migration is still central to the Irish experience.