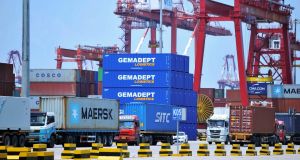 Containers being transferred at a port in Qingdao in China’s eastern Shandong province. With China and the EU facing into trade wars with the US, both sides see the meeting as important in cementing an alliance in defence of the World Trade Organisation. Photograph: AFP/Getty Images

The 20th EU-China summit, opening in Beijing on Monday morning, is expected to produce a long-awaited common statement on shared values and act as a defence of the current international trading system.

With China and the EU facing into trade wars with the US, both sides see the meeting as important in cementing an alliance in defence of the World Trade Organisation and the rules-based international trading system.

“It is part of our DNA,” a senior EU official said on Friday, adding that China “has found that it serves it well”.

The WTO trading system, he said, is “at a tipping point” and it is crucial that major players such as the EU and China act together to safeguard it.

The Europeans see China’s continued commitment to the WTO, which it only joined in 2001, as particularly important and have welcomed the latter’s involvement in a bilateral WTO working group to discuss reforms. The EU believes China, now a champion of rules-based free trade, is key to its reform.

The same message will come from the EU-Japan summit in Tokyo on Tuesday. The EU leaders will sign the largest trade deal negotiated yet by the union, the economic partnership agreement (EPA), an agreement that Brussels has said is sending “a very powerful signal against protectionism”.

Agreed in outline last July, the deal opens up the EU to Japanese cars and car parts, and Japan to EU cheese. When fully implemented, 99 per cent of the tariffs applied on EU exports to Japan – currently some €1 billion – will be removed.

The Beijing meeting will be hosted by Chinese premier Li Keqiang and attended by European Council and European Commission presidents Donald Tusk and Jean-Claude Juncker respectively; they will also have a session with China’s president Xi Jinping.

Not all sweetness and light

It will not be all sweetness and light. The EU has important issues with China over the slowness of Beijing in opening up its markets. At the summit, the EU expects to exchange market access offers and new promises on governance for a Comprehensive Agreement on Investment. That should lead to a deal to open more sectors and provide investment protection.

The EU also wants the summit to take decisive steps towards a bilateral agreement on protection of geographical indications (GIs), allowing better protection of well-known European food brands in China. However, the agenda will also range widely over issues where the union welcomes Beijing’s support and practical work – much, but not all, of it also in defiance of the US.