China extends olive branch to US at summit with EU

Beijing does not want to sideline US, as Europe seeks common front against tariffs 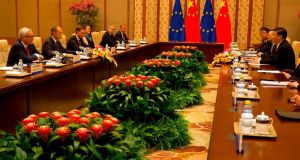 China’s premier Li Keqiang has extended an olive branch to the US in the midst of Beijing’s efforts to rally international support against new trade tariffs imposed by the Trump administration.

Speaking after a meeting with European leaders on Monday, Mr Li said China was not willing to leave behind either the US or Russia as it tried to preserve a global trading system.

The conciliatory words followed an escalation in US rhetoric against its trading partners, including the EU and China, and came as US president Donald Trump prepared to meet Russian president Vladimir Putin in Helsinki.

So far on his European trip Mr Trump has clashed with Washington’s more traditional allies at a Nato summit in Brussels and at a meeting with UK prime minister Theresa May in Britain, and described China and the EU as “foes” of the US.

After meeting with Mr Li in the ornate Great Hall of the People on Monday, Donald Tusk, president of the European Council, called for reform of the World Trade Organisation, including new rules on industrial subsidies and intellectual property rights. China has been cultivating EU political leaders and investors as it tries to build a common front against the US tariffs.

But a reformed WTO could not exclude the US or Russia, Mr Li told reporters. “As I said in the beginning of my meeting with Mr Tusk and Mr Juncker: our negotiations are not targeted at any third party and cannot be influenced by any third party.” Jean-Claude Juncker, president of the European Commission, was also present at the high-level talks.

“Leaving behind any other county – let’s not even talk about leaving behind the US or a country located between Europe and China – is unfeasible. Because this is a multilateral trade agreement,” Mr Li said.

Mr Li added that China’s trade deficit with the US was a matter to be resolved bilaterally. “Even though we are the victims, we are willing for both to benefit, that means both sides. To resolve the US-China trade deficit requires both the US and China,” he said.

European leaders are anxious to preserve multilateral institutions, including the WTO, that have their origins in accords signed after the second World War. Those agreements, and the US role as the most powerful player within them, are being challenged by China’s emergence as the world’s largest economy and by Russia’s resurgent influence over its neighbours.

“We are all aware of the fact that the architecture of the world is changing before our very eyes,” Mr Tusk said, referring to the meeting between Mr Trump and Mr Putin in Helsinki.

“It is a common duty of Europe and China, America and Russia, not to destroy this order, but to improve it,” Mr Tusk told journalists in Beijing, “not to start trade wars, which turned into hot conflicts so often in our history, but to bravely and responsibly reform the rules-based international order.

“This is why I am calling on our Chinese hosts, but also on presidents Trump and Putin, to jointly start this process with a reform of the WTO.”

China has sought warmer ties with the Europeans, with Arab states and its neighbours in Asia as it seeks to counter the US tariffs, which threaten its investment- and export-driven growth model. For the first time in two years, the annual summit ended with a joint statement on a variety of international issues, after disagreements scuppered previous attempts.

Beijing has downplayed its Made in China 2025 policy to create national industrial champions as it rolls out liberalising measures in the financial services, automobiles and pharmaceutical sectors to woo foreign investors. A precipitous drop in foreign investment in 2017 reflects European corporations’ concerns, Mr Juncker said, while acknowledging that “there has been progress”.

“If China wants to open up, it can open up and it knows how to,” he said, switching into French. “Actions are more important than words.”

Reforms that China might seek at the WTO include a resolution of how its state-owned enterprises are treated under investment and procurement rules, and faster and more enforceable dispute settlement. In applying its unilateral tariffs, Washington has said that disputes at the WTO take too long to resolve, leaving all the advantage to the offending nation as the process drags on.

China for its part is challenging the US’s unilateral action at the WTO. It has also filed a complaint against the European Union for failing to grant China market economy status, as stipulated in its WTO accession agreement. The EU is considering legislation that would remove the distinction between “market economy” and “non-market economy” in dumping disputes.