Value of Irish trade with UK falls amid Brexit uncertainty 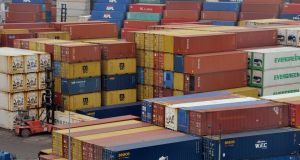 Latest trade numbers from the CSO show exports to Britain fell by €508 million to €5.5 billion between January and May this year. Photograph: Alan Betson

The value of Irish exports of goods to Britain has fallen by 8 per cent this year while imports are down 6 per cent, raising concerns that Brexit might already be negatively impacting trade between the Republic and its nearest neighbour.

The latest trade numbers from the Central Statistics Office show exports to Britain fell by €508 million to €5.5 billion between January and May this year.

Imports from Britain also decreased by €97 million (6 per cent ) to €1.5 billion in May but were up in the five-month period to May.

The State’s trade with the UK has so far been largely unaffected by Brexit with exports and imports remaining steady.

This resulted in a trade surplus for the month of just over €5.2 billion, up 20 per cent or €867 million on the previous month.

While the monthly trade numbers can be volatile, the underlying trend remains positive with the value of exports for the first five months of 2018 put at €56 billion, up 7 per cent on the corresponding period last year.

The main drivers of the monthly figures were exports of medical and pharmaceutical products, which rose by €1.5 billion (54 per cent) to €4.4 billion in June. In contrast, exports of organic chemicals decreased by €239 million (12 per cent) to €1.8 billion.