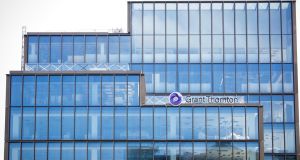 Grant Thornton’s office on City Quay: “The underlying economic success we are achieving is being frustrated by the consequence of almost-full employment.” Photograph: Tom Honan

The march to full employment is more threatening to businesses in Ireland than Brexit, according to Grant Thornton’s latest International Business report.

The survey of business leaders found that while Brexit uncertainty was having a negative impact on sentiment in the Republic, issues around employee recruitment and retention posed an even bigger potential stumbling block.

The research shows rising confidence among businesses here with nearly two-thirds expecting to recruit more staff in the coming months.

However, the lack of skilled workers was an issue for one-third of companies, which cited this as a major business constraint. A majority (86 per cent ) of businesses surveyed also expect to offer employees a pay rise.

“The underlying economic success we are achieving is being frustrated by the consequence of almost-full employment,” Brendan Foster, head of operational advisory at Grant Thornton Ireland, said.

“The cost and disruption to business of longer recruitment timelines, higher staff turnover due to greater employee prospects is, when added in real wage inflation across all sectors, dragging down business sentiment,” he said.

“The lack of available and affordable accommodation is adding significantly to the hiring and retention of staff and [problems] attracting talent from overseas,” Mr Foster said.

Overall, Grant Thornton’s report, based on the views and expectations of more than 10,000 businesses across 36 economies, found that businesses leaders globally were less optimistic about the economic outlook, despite continuing rises in expected revenues, indicating that the global economic cycle may have peaked.

The report noted that despite the backdrop of looming US interest rate rises, ongoing trade disputes and the end of quantitative easing in the EU, businesses were not taking steps to structurally invest to counter the risks the next stage of the economic cycle presents.

Some of the largest drops in optimism were seen in the EU, where optimism for the region fell from a net 60 per cent to a net 46 per cent with Ireland showing a net 42 per cent, a drop of 28 percentage points on the previous quarter.