Copying Irish policy of rounding could be followed by outright withdrawal 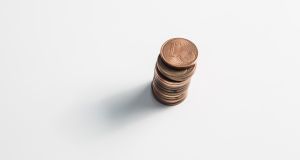 The European Commission is considering a proposal to phase out 1 cent and 2 cent coins, an EU document showed, in what would be a cost-saving move as the coins’ production and handling costs often exceed their face value.

The possible measure is included in the EU executive’s working programme for this year, released on Wednesday, and is scheduled for the October-December period after an evaluation of the use of the two smallest euro denominations.

The commission is considering introducing rounding rules that would apply in all EU states, so that consumers could pay without using 1- or 2-cent coins. This policy is already in place in the Republic.

“A possible proposal would introduce common rounding rules to address the challenges related to the use of 1- and 2-euro cent coins,” the document said.

Among the 19 euro zone states, the Netherlands, Finland, Belgium and Italy have, like the Republic, already passed rules that require or encourage rounding cash payments in an attempt to reduce the use of the two denominations.

Rounding would likely be the first step before outright withdrawal of those coins, as it would make them gradually fall out of use.

In a report published in 2018, the commission had said rounding could go together with an immediate withdrawal. Or it could be applied in a “fading scenario” in which 1- and 2-cent coins would no longer be issued, but would remain legal tender.

The commission is still considering the best option. “There is no final decision on that proposal,” commission vice-president Maros Sefcovic told a news conference on Wednesday.

In the 2018 report, the commission said that issuing 1 cent coins “is a loss-making activity for member states”. Italy stopped minting them in 2017. Procurement costs alone exceed the face value of this coin. In some states also the costs of 2 cent coins are higher than their value.

An EU poll in 2017 showed citizens from euro zone countries overwhelmingly supported phasing out the coins.

To quell concerns of higher inflation caused by the possible move, the commission said in its 2018 report that countries where the use of those coins has already been limited have not shown a measurable increase in prices.

As in the Republic, prices would be rounded up or down to the nearest 5 cent when making a cash payment. Lower costs for cash handling could also allow retailers to lower prices, the commission report said. – Reuters

1 Bank leaked my loan request to family who tried to rip me off
2 Eason acquires rival Dubray Books for undisclosed sum
3 When the Chemistry no longer works – the closing of a leading Irish ad agency
4 Solar panels: Are they worth the investment?
5 What is at stake for Ireland in the new Brexit talks?
6 Battery bottleneck stalls electric car sales
7 Fuel company loses €1.3m challenge over tax bill
8 Ryanair and Aer Lingus monitor impact of coronavirus on travel to Italy
9 Digicel’s earnings rise as it looks towards refinancing $1.3bn of bonds
10 Coronavirus leads United Airlines to withdraw profit forecast
Real news has value SUBSCRIBE