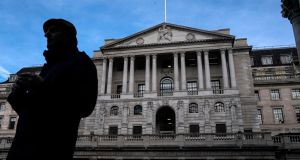 Expectations for the Bank of England’s next steps are not clear. Photograph: Will Oliver/EPA

A renewed slide in sterling and a rally in UK government bonds this week suggested that some investors are bracing for a cut to interest rates after the Bank of England’s first meeting of the year on Thursday.

The pound has shed almost a cent of its value against the dollar to trade at $1.30, while UK government bonds have climbed back toward the record highs they touched last summer. The rally, assisted by a broader rush into less risky assets after the coronavirus outbreak, pushed 10-year gilt yields below 0.5 per cent on Tuesday.

The shift comes just over a month after the election victory of Boris Johnson’s Conservative party sent the pound soaring, and underscores how quickly the outlook has softened, despite an upturn in UK manufacturing data.

“Despite the bounce in the [manufacturing survey] we still expect the BoE to go ahead and cut rates,” said Jordan Rochester, a currency strategist at Nomura in London, noting that the currency will probably drift lower against its peers ahead of the decision.

Expectations for the BoE’s next steps are not clear. Some analysts and economists believe that signs of expansion in the country’s private sector are sufficiently encouraging to at least stay the central bank’s hand for now. Derivatives markets are reflecting a roughly 50 per cent chance that the BoE will cut its benchmark rate to 0.5 per cent, from 0.75 per cent.

Andrew Harman, senior portfolio manager at First State Investments, expects the BoE to cut rates this week or at the next meeting in late March. “Data from the second half of 2019 shows the UK economy was soft, although the recent January 2020 PMIs suggests a modest pick-up in economic activity [after] the election,” he said.

The BoE’s monetary policy committee could decide on “a precautionary cut” now, Mr Harman added, or it may wait until the next meeting, to see to what extent the government unleashes fiscal stimulus in its budget due in mid-March.

If the BoE does deliver a rate cut, investors may interpret the move as a one-off. But Silvia Dall’Angelo, a senior economist at Hermes Investment Management in London, noted that while the US Federal Reserve and other major central banks eased policy last year, the BoE is late to the party.

“I think it’s a bit late for an ‘insurance cut’, and at this stage it would be better if the BoE kept its powder dry if it really thinks that the economy is at risk of slowing,” she said. – Copyright The Financial Times Limited 2020