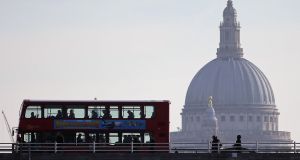 Martin Wolf: “Never in my lifetime has a British government been so determined to inflict economic damage on its own people.” Photograph: AFP via Getty

My father told me he heard these words from an elderly gentleman sitting beside him on the London Underground in June 1940, just after the fall of France. The same insularity animates Brexit. It was an illusion then – it was not the UK alone, but an alliance with greater powers that won the second world war. It is an illusion now. The UK will not be alone, but it will be lonelier.

We cannot know what would have happened if the 2016 referendum had the opposite outcome. That is the road not taken. But we know some results and may at least guess at others.

Brexit is a decision to separate the UK from the institutions governing the continent of which it is necessarily a part. One result is certain: British people will lose the right to move and work across the EU, as will citizens of EU members to live and work in the UK. That is a reduction in freedom. It is the result of insisting that one should not have both a British and a European political identity. This is a victory of narrowness.

The direct influence of British political choices on those of the neighbours will also vanish. British politicians will press their noses against the EU windows as decisions that affect them are made. Those decisions will determine the evolution of the single market and EU trade and climate policies. Without the UK, the EU will still have 450 million people and produce 18 per cent of world output. It will also remain the UK’s most important trading partner. The UK’s self-exclusion will matter.

Moreover, never in my lifetime has a British government been so determined to inflict economic damage on its own people. The government’s own analysis, published in November 2018, concluded that, under a bare-bones free trade arrangement of the type the government seeks, UK gross domestic product per head is likely to be about 5 per cent smaller than it would otherwise be, over the long term. Elimination of net immigration from the European Economic Area would increase the loss by 0.5 percentage points. It is possible that the UK will lose close to half of its potential increase in GDP per head over the next decade, with grim implications for government revenue and spending.

This ignores the short-term costs. Sajid Javid, chancellor of the exchequer, has told business to abandon calls for regulatory alignment with the EU, stating that they have had three years to prepare. That is nonsense. Nobody has known (or even now knows) what agreement, if any, will be reached. The combination of uncertainty about the outcome with minimal time for adjustment is grotesquely irresponsible.

Brexiters will claim that, freed of the “dead hand” of EU regulation, the UK will thrive. This is likely to prove a fantasy. One reason is that the UK already has a highly deregulated economy, notably in the labour market. Is the UK going to abandon current regulations over the environment, product standards, financial soundness and so forth? That is very unlikely. Moreover, the big failings of the UK – its ultra-low investment rate, weak productivity growth, poor infrastructure, high regional inequality, and long educational tail – have nothing to do with EU membership. Brexit may eliminate many excuses. It will not solve any of these problems.

That is far from all. If there is no trade agreement with the EU, or one that proves disruptive, a blame game is sure to ensue. Within the UK, Remainers will blame Leavers and vice versa. More important, the government might blame the EU for an unhappy outcome, and vice versa. Such discord could well take on a life of its own, driving Britain and the EU further apart. It is even possible to imagine an angry and destructive UK seeking to co-ordinate with Donald Trump’s US against the EU. The consequences would be devastating.

The UK’s departure, let alone the nightmare of prolonged hostility, is also likely to shape the future EU. Britain played a central role in promoting the single market and a liberal EU trade policy. Its departure is likely to weaken the influence of more economically liberal northern countries against the others. The EU is then likely to be more inward-looking than it would otherwise have been. Yet it is also likely that Brexit will reinforce the solidarity of a more beleaguered EU. Either outcome will much affect the UK.

The UK is also likely to find it hard to exercise much independent influence upon a world entering an era of great power rivalry. Next to the US, China or the future EU, it is an economic minnow, albeit a large one. In such a world, reliance on multilateral institutions is likely to prove futile. Again and again, Britain will face choices over which side to choose in struggles, perhaps over technology or standards, that are occurring far over its head. All this will be very uncomfortable. Not least, the UK will frequently find itself a supplicant in relations with powers greater than itself. It will have to be nimble and humble. That may work. But the control it is allegedly taking will be illusory.

The UK is entering a new world. It is forcing its people to abandon their rights in Europe. It is standing aside from the European project of structured and peaceful co-operation. It is choosing to be an independent island next door to what seems likely to remain an integrated European giant. It is deciding to go its own way in a world dominated by rivalrous superpowers. It is doing so on the promise of greater control over its own destiny. It is, not least, acting against the wishes of the majority of its own young people.

Will this separation endure? Nobody can know. But it is quite likely to last a long time. In my own view, it is a huge blunder. But the moment is now upon us. We must live with its consequences. – Copyright The Financial Times Limited 2020