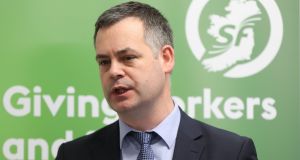 Sinn Féin’s biggest proposed tax raising measure in its election manifesto involves changing a key rule in relation to taxing some of the big multinationals here, which it says would raise €722 million a year.

The proposal immediately sparked controversy – it has previously been the subject of heated exchanges between the party’s finance spokesman, Pearse Doherty and Minister for Finance Paschal Donohoe. At the heart of this is one company – Apple – and how it pays tax in Ireland. Here is why.

A number of big multinational companies have moved their intellectual property (IP) to Ireland in recent years. This means the trade marks, copyrights and patents related to the sale of their products in international markets outsider the US are owned by Irish subsidiaries. These are hugely valuable assets – representing the investment companies have made in developing, designing and marketing products like the iPhone, for example. Previously many were held in tax havens like the Cayman Islands.

Big profits accrue from the use of these IP assets. However, because of the scale of investment made by firms in building up their IP , there are also big tax allowances – know as capital allowances – which mean these profits can be sheltered from tax from lengthy periods.

Ireland introduced capital allowances on intangible assets like IP in 2009. A significant change was made by then minister for finance Michael Noonan in 2014.

Previously companies could use these allowances as a writedown against a maximum of 80 per cent of the profits earned in any year.In other words they had to pay tax on at least 20 per cent of their income each year. Noonan increased this to 100 per cent. The total value of the allowances remained the same – but the change meant that companies moving IP here could avoid paying any tax at all on the resulting profits for a period.

All things being equal, the exchequer gets the same amount of money overall but the 80 per cent rule means the State gets the money sooner.

In the 2018 budget, Paschal Donohoe changed the rules back to limit the amount of profits which could be written off to 80 per cent – but said this would only apply to IP moved here after January 1st, 2018. Companies that moved their IP here after that date would pay tax each year on a minimum of 20 per cent of the profit earned but, crucially, companies that did so between 2015 and 2017 – notably Apple – could still claim the allowance against 100 per cent of their profits.

Sinn Féin proposes to apply the 80 per cent rule on IP moved here between 2015 and 2017. The party argues that. in a report for the Department of Finance on the rules change, this is what was recommended by UCC economist Séamus Coffey, the former chairman of the budgetary watchdog, the fiscal advisory council.

However, in a finance committee debate last November, Donohoe said he had been advised by Revenue “that, in the short term, there could be a large theoretical cashflow gain tentatively estimated to be in the region of €722 million” from the application of the 80 per cent cap on intangible assets on-shored between 2015 and 2017. “However, it is important to clarify that such a change would not lead to more tax overall and this is simply a timing matter. To present this as additional ongoing tax for the exchequer would not be correct.”

His point is that the change would just lead to companies paying tax earlier. They would still benefit from the full capital allowance and so would, in time, be able to shelter the same amount of profit from tax. Exposing 20 per cent of profits to tax now would mean some of it would be paid earlier, but – assuming the IP assets remained in Ireland – would cut revenues to the exchequer later on.

Doherty argued that it is better to take the tax revenue now because we do not know whether the IP assets will, in fact, remain here and ne subject to Irish tax in the long term, or whether the big players – he named Apple in the financ committee – will change their structures again as the allowances start to run out.

These allowances can last for up to 15 years, but we do not know precisely what allowances any individual company is claiming in any particular year.

Writing in a personal capacity in The Irish Times in 2017 after Donohue announced the change from 2018 on, Coffey argued that imposing the 80 per cent limit on the IP moved here from 2015 to 2017 would have been the right approach, given the uncertainty about the future structures of these big companies.

Doherty told the committee last November that “given the volatility and changes happening internationally, there is nothing to say that this will remain constant for the coming years and that we will, therefore, get this money.”

The backdrop to it all, of course, is the massive flood of corporate tax into the economy in recent years – largely due to these big players – and the uncertainty about how long this will continue for.