State has 17 ultra-wealthy people, according to report published ahead of Davos forum 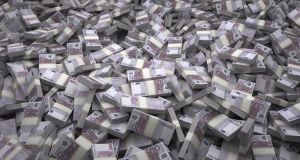 Ireland has the fifth-largest number of billionaires per capita in the world, Oxfam said in a report ahead of the World Economic Forum conference in the Swiss ski resort of Davos this week.

There are now 17 Irish billionaires, the vast majority of whom are men, ranking Ireland behind just Hong Kong, Cyprus, Switzerland and Singapore in terms of ultra-wealthy individuals relative to the wider population, according to the charity.

The Irish figures reflect a “global trend when it comes to wealth inequality”, with the world’s 2,153 billionaires owning more wealth than the 4.6 billion people who make up 60 per cent of the planet’s population.

Oxfam has called for governments to create fairer fiscal systems and crack down on tax loopholes to raise the revenue needed to invest in national care systems and public services, without relying on unpaid and under-paid work by women.

The report comes as many of the world’s billionaires will join political and corporate leaders as well as celebrities at the 50th forum in Davos between January 21st and 24th.

The Irish billionaire list includes: Dublin-born Hilary Weston, who together with her husband Galen Weston heads up an international fashion and food empire; Patrick and John Collison of payments giant Stripe; and John Dorrance III, the American-born grandson of the creator of the formula for Campbell’s condensed soup. He moved to Ireland in the mid-1990s.

Who are the Irish billionaires?

The list, which draws on billionaire estimates of Forbes and the Sunday Times, also includes the family of beef magnate Larry Goodman, telecoms businessman Denis O’Brien and the Dunne and Heffernan families behind Dunnes Stores.

The Oxfam report outlines how half the world’s population continues to live on less than €5 a day. Women in particular “get a raw deal as the global economy fails to adequately reward those who carry out care work”.

Women do more than three-quarters of all unpaid care work globally, said Oxfam. The organisation said that this contributes at least $10.8 trillion (€9.7 trillion) a year.

In Ireland, women do 38 million hours of unpaid care work every week, contributing at least €24 billion to the economy every year, said Oxfam. That is the equivalent of about one-eighth of the entire annual national economy.

He added: “Unpaid care work is the ‘hidden engine’ that keeps the wheels of our economies, businesses and societies moving.”