Concerns grow over reliance on corporate sector, and health overspending 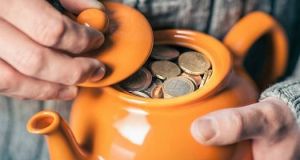 The exchequer figures show the Government collected just under €25 billion in taxes in the year to the end of June, which was 5 per cent up on last year and more than €168 million ahead of target. File photograph: Getty Images

Another surge in corporation tax receipts in the first-half of 2018 has put the Government on course to exceed its budgetary targets for the year.

While the stronger-than-expected performance, detailed in the latest exchequer returns, is expected to increase the clamour for tax cuts in the budget, it has renewed concern about the Government’s increasing reliance on corporation tax, which now accounts for 16 per cent of the State’s total tax take.

In addition, worries about overspending in health budgets are escalating in Government with yesterday’s figures showing health spending is €167 million above its projected level.

The exchequer figures show the Government collected just under €25 billion in taxes in the year to the end of June, which was 5 per cent up on last year and more than €168 million ahead of target.

The strong performance was driven by corporation tax receipts, which brought in a record €4 billion for the six-month period, which was 9.1 per cent or €335 million above what the department had targeted.

About 40 per cent of the revenue generated from corporation tax here comes from just 10 firms. It is understood these include tech giants Apple, Microsoft, Dell, Google and Oracle.

The Government has been warned repeatedly not to rely on current corporate tax growth to fund permanent spending measures given the increasingly uncertain outlook internationally. The Republic’s economy has been the best performing in the EU for the past three years, swelling the Government’s tax take in the process.

The latest returns show income tax, the Government’s largest tax stream, generated €9.6 billion, which was 1 per cent ahead of target for the period, reflecting the current strength of the labour market.

Separate figures from Central Statistics Office (CSO)showed unemployment fell to a new post-crash low of 5.1 per cent in June, a level not seen since October 2007 just prior to the financial crisis.

The strong performances in income and corporation tax in the latest returns more than offset a forecasted shortfall in excise duty, which came in at €2.47 billion or €188 million below target.

Despite the positive exchequer figures, there is growing concern at escalating spending in the Department of Health.

According to the exchequer returns, the overrun in health spending is at €167 million. However, sources say that the underlying level of budget overrun is higher given that the health service also returned deficits last year.

Official figures show that level of spending is €600 million higher than last year. The total health budget is over €15 billion this year.

Speaking in the Dáil, Minister for Finance and for Public Expenditure Paschal Donohoe said health spending at the end of May was running at 10 per cent higher than last year.

Mr Donohoe also said that the health service was recruiting over 300 new staff every month.

“That does not sit with some of the narratives that are at times painted about the recruitment difficulties we have with our health services. I am working closely with the Minster for Health on this and we will have to be clear as to where this matter stands in advance of the budget,” he said.

The latest reports of overspending in the health service come as Mr Harris prepares to bring the Slaintecare implementation plan to Cabinet. Concerns persist however in the Department of Finance that the Slaintecare plan will require further resources.