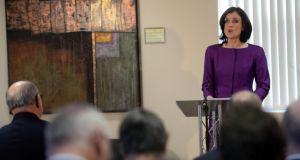 Northern Ireland Secretary of Sate, Theresa Villiers: said she believed the Bill had the potential to create thousands of jobs and stimulate growth. Photograph: Stephen Davison

New legislation that will give the Northern Ireland Executive the power to set a different rate of corporation tax than elsewhere in the UK, represents a “victory” for business in the North according to industry leaders.

The Northern Ireland secretary of state Theresa Villiers unveiled the Corporation Tax (NI) Bill which provides for the devolution of tax powers to the Assembly during a visit to a company in Lisburn.

Ms Villiers said she believed the Bill had the potential to create thousands of jobs and stimulate growth by encouraging local businesses to invest more in the North and winning new inward investment.

The rate of corporation tax is 21 per cent in Northern Ireland while the rate in the Republic is just 12.5 per cent.

UK chancellor George Osborne agreed there was a strong case for devolving the tax-setting powers: “This will give the Northern Ireland Executive greater power to rebalance the economy towards a stronger private sector, boosting employment and growth.”

Progress of the Bill, which the British government hopes will come into law before the UK general election in May, is linked to political parties delivering on their commitments to the Stormont House Agreement, notably on welfare reform and agreeing a credible 2015/2016 budget. A new rate, likely to match the Republic’s, could be in place by April 2017.

The British government said the new tax regime which the legislation will create has been “carefully designed” to encourage genuine investment that will create jobs and growth and limit the opportunities for companies to benefit from avoidance and profit-shifting tactics.

It will provide for the Assembly to set the corporation tax rate over most trading profits.

Eamonn Donaghy, the local businessman who led the corporation tax campaign, believes the tax-setting powers will transform the economy.

“It is a significant step forward for everybody in Northern Ireland – it is going to change where we are going. This is about moving away from our past and creating a new future,” said Mr Donaghy, head of tax for KPMG Northern Ireland.

The Institute of Directors in the North also believes the decision to devolve tax-setting powers signals a “new dawn for the Northern Ireland economy”.

Minister for Finance Simon Hamilton said: “I welcome the introduction of this Bill to parliament. It will provide the vehicle to secure corporation tax rate-setting powers for Northern Ireland.”

According to Chartered Accountants Ireland, the Bill creates the environment for “realistic planning” for local politicians and prospective investors. Brian Keegan, its director of taxation, said: “Any measure designed to boost the Northern Ireland economy is ultimately good for the island as a whole.”