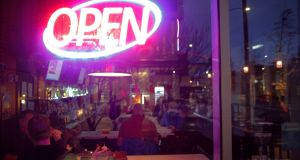 While some Seattle businesses have already closed their door, others have found ways to adapt. Photograph: Reuters

Last week, Olga Sagan gathered her staff at Piroshky Piroshky, a chain of pastry makers in Seattle. Foot traffic had dropped 70 per cent because of the coronavirus. Catering was at zero.

“I said guys, we are a bakery. We’ll do what we do well, but we’re also doing bread,” she said. “Because people eat bread. We’re launching it today.”

Ms Sagan lives at the centre of the US coronavirus crisis. She also grew up in Russia, so always keeps three months’ worth of cash on hand.

Now her adoptive home of Seattle is being used by the US Small Business Administration as a test case for how the coronavirus will affect neighbourhood shops and restaurants. Data from the restaurant reservation site OpenTable showed that bookings on Thursday were down 58 per cent over the previous year, more than any other American city. Some Seattle businesses have already closed their doors. Others have found ways to adapt.

Jeremy Field, the SBA’s regional administrator for the Pacific Northwest, said he now has a daily call with the other regional administrators about the crisis, and has been in constant contact with leaders in Washington DC. “This is new information to a lot of guys in headquarters,” he said.

Unlike in a recession, social distancing precautions during a pandemic cause an almost immediate collapse in in-person services. On March 3, when Seattle’s mayor declared a state of emergency, restaurant bookings in the city were already down 31 per cent over the previous year, according to OpenTable. By comparison, bookings that day in New York City were down 12 per cent.

Karen Ginther of Seattle Score, a non-profit that advises small businesses, said that in the past week she had seen a complete change in the kind of requests she gets. No one wants to start a business. Everyone wants to resuscitate one. “Every kind of business,” she said. “Retail, restaurants, a lot of subcontracting-type businesses, wanting to keep their employees. They have no cash flow any more. We’re seeing it all.”

Jacque Coe of the Washington Hospitality Association said: “Right now, the greatest challenge is the current lack of revenue due to the sudden and dramatic drop in sales.”

In particular, restaurant owners in Seattle said decisions by Amazon, one of the city’s major employers, have had a profound impact on their revenue. On March 5, the company advised its employees in the city to work from home. Mark Canlis, who runs the upper-end family-owned Canlis restaurant, said that was when his corporate private dining business disappeared.

“Everyone saw pretty quickly, hey, we’re one headline away from not having a job,” he said.

Mr Field said the “economic injury” disaster loans that come directly from the SBA, a solution for small businesses that received supplemental funding from Congress on March 6, were a limited tool for a pandemic. Disaster loans “aren’t going to be a silver bullet”, he said. They only apply to businesses with no other source of credit, and though the agency is rushing the process, approval can take as long as three weeks.

“The disaster loans are going to be there,” he said. “They’re going to help a population of small businesses, but I anticipate that most of the loans that will help small businesses will come through our more traditional loan packages.”

This will put the burden of scaling up quick approvals on US commercial banks. The SBA’s “7a” loans, used by small businesses for start-up and working capital, are underwritten by commercial banks, but guaranteed by the federal government. In 2019, the SBA backed 52,000 such loans nationwide. Mr Field said currently, through the agency’s online “Lendermatch” tool, businesses could get loan approval for less than $350,000 from a bank between two to three days.

A bill introduced by Marco Rubio in the Senate would add $50bn in funding to the 7a programme, raise the quick-loan limits to $1m, and open the loans to payroll support.

The SBA in Seattle already keeps a joint list of businesses in distress with Washington State. “Policy diffusion is a really important thing,” he said. “I think other states can model what is happening here between state and federal agencies.”

Small businesses in other states will need to watch how the city’s restaurants adapt as well. On Wednesday, Seattle chef Tom Douglas announced that he would close 12 of his 13 restaurants for two to three months. According to the Seattle Times, 800 employees were directed to file for unemployment.

It was a shock to both Ms Sagan and Mr Canlis, and they vowed to change how they do business in order to keep their own staff.

“The rules changed a little bit,” said Mr Canlis, a former Air Force special warfare officer, “but the game’s not up. The game’s not over at all. Everyone’s still gotta eat.” He has adapted his restaurant to a longer-term environment where social distancing is the norm. Located just off a freeway exit, he has converted a portico into a drive-through, and within the week will have his servers walk paper bags of dinner out to drive-in dining in his parking lot, using contactless payments.

Like Ms Sagan, he said this had been made possible through a conservative approach to finance. He had resisted offers to borrow money and expand. Instead, he put his capital into buying the land where his restaurant sits. So far, he has held on to all 115 of his employees.

Ms Sagan has had to put Piroshky Piroshky’s 15 contract workers on standby, but still has 53 people working in her bakeries, including all of her full-time employees. In addition to converting to bread, she has shifted her catering staff and food truck into a delivery service, and will soon be able to take online orders directly from her website. She prefers this to working through services such as Uber Eats, which take a cut. She is also reaching out to local grocery stores, which she says are “overwhelmed” with demand for staples.

“I'm so proud of business owners who aren’t giving up,” said Ms Sagan. “We are powerful. We have food. This is America. You don’t give up.” – Copyright The Financial Times Limited 2020