Coronavirus: Ireland in US travel ban due to open border with UK, says Trump

US president Donald Trump has extended his country's travel ban to include Ireland and the United Kingdom. Video: The White House 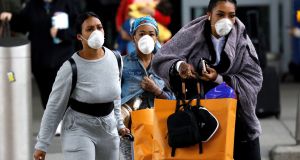 US president Donald Trump has cited Ireland’s open border with Britain as a key reason for including the country in the travel ban.

It also noted the Centre for Disease Control (CDC) had determined the Republic of Ireland is experiencing “ongoing sustained person-to-person transmission of SARS-CoV-2”.

“As of March 13, 2020, the World Health Organization (WHO) reported that the Republic of Ireland had 70 cases of Covid-19, 5 times more cases than there were 7 days prior.”

Similarly the White House noted the United Kingdom’s number of cases had increased, with the WHO reporting five times more cases than in the seven prior days in Britain.

It concludes: “The United States Government is unable to effectively evaluate and monitor all of the travelers continuing to arrive from the United Kingdom and the Republic of Ireland.”

“The potential for undetected transmission of the virus by infected individuals seeking to enter the United States from the United Kingdom and the Republic of Ireland threatens the security of our transportation system and infrastructure and the national security.”

However, Mr Trump said in the statement that “the free flow of commerce between the United States and the United Kingdom and the Republic of Ireland remains an economic priority for the United States, and I remain committed to facilitating trade between our nations.”

The travel restrictions, which will take effect at 4am Tuesday morning (midnight US time) will apply to all travellers who have visited one of the prohibited countries in the previous 14 days.

US citizens, green card holders, and certain categories of visa holders are exempt, though they must re-enter the United States through 13 designated airports where they will be screened.

American Airlines said on Saturday it plans to cut 75 per cent of its international flights through May 6th and ground nearly all its widebody fleet, as airlines respond to the global collapse in travel demand due to the coronavirus pandemic.

Southwest, one of the few US airlines still flying a full schedule, said it was “seriously considering” cutting flights.

US vice president Mike Pence said restrictions on the UK and Ireland will begin Monday at midnight, barring most non-US citizens from entering the United States who have been in those countries within the last 14 days.

In the Republic, a male patient has become the second Covid-19-related death in the State. The fatality comes after 39 new cases were announced on Saturday evening, bringing total infections in the State to 129.

The person who died, a male in the east of the country, had an underlying condition. Dr Tony Holohan, the chief medical officer, extended his condolences to the family and friends of this person.

The new cases are among 21 males and 10 females. Some 21 are associated with the east of the country, 13 the south, three in the North West, and two in the west.

The chief medical officer, Tony Holohan, delivered a strong warning about compliance with social distancing measures following anecdotal evidence that activity in pubs and restaurants would suggest recommendations are not being observed.

“There are a lot of anecdotal reports of busy restaurants and pubs. It’s important to get the message out. Listen to the message, take personal responsibility . . . reduce as much as possible social activity.”

The expansion of the US travel ban to include Ireland and Britain, as well as the Schengen countries named on Wednesday, came as the White House announced that Mr Trump had tested negative for the coronavirus.

According to the White House statement by the president’s physician, Mr Trump was tested for Covid-19 on Friday evening. “Last night after an in-depth discussion with the President regarding Covid-19 testing, he elected to proceed. This evening I received confirmation that the test is negative,” physician Sean Conley said.

He added: “One week after having dinner with the Brazilian delegation at Mar-a-Lago, the president remains symptom free.”

The decision by Mr Trump to take the test came despite a statement by the White House late on Friday that White House doctors had advised him that there was no need to take the test, even though an aide to Brazilian president Jair Bolsonaro who stood next to the president in his Florida estate last weekend was confirmed to have the virus.

But Mr Trump said on Saturday that he had decided to take the test “based on the press conference yesterday,” a reference to a press conference he had on Friday afternoon at the White House when he was questioned about his decision not to get tested.

Mr Trump met with Taoiseach Leo Varadkar in the oval office the day before he got tested. It is not yet clear if vice president Mike Pence has been tested for the virus.

Journalists had their temperatures taken by medical officials in the White House on Saturday ahead of the press conference, with one reporter removed from the West Wing after showing an elevated temperature.

“Out of an abundance of caution, temperature checks are now being performed on any individuals who are in close contact with the President and Vice President” a White House spokesman said.

No journalists or officials were tested before entering the Oval Office for the Varadkar-Trump meeting on Thursday.

The development came as the number of reported cases in the United States passed 2,500.

Three new states reported their first coronavirus cases on Saturday bringing the total number of deaths across the United States to 53. But the lack of sufficient testing kits throughout the country has raised fears the number could be much higher.

The threat posed by coronavirus has begun to hit a range of services and events across the United States.

Individual states have announced their own initiatives, with some announcing the closure of schools. Ohio, Virginia and Washington DC were some of the regions that ordered schools to shut, with states such as New York mandating only a handful of schools to close.

In Washington, Smithsonian museums in Washington shut their doors on Saturday - the latest in a series of closures to his the US cultural industry. In New York, the lights on Broadway have gone dark, after an employee tested positive for the virus. The Metropolitan Museum of Art, the Guggenheim and the New York Philharmonic have all temporarily shut their doors.

Other major sites across the United States have been closed, including Disneyland and Universal Studios in California and Disneyworld in Florida.

The sports world has also been hit. The Boston Marathon and the US Masters will now not take place. Major League Baseball has also postponed the start of its season. The world of basketball has also been hit after two players with the Utah Jazz team tested positive for the virus. The NBA has suspended activities for 30 days. – additional reporting Reuters

* America Letter: Garbled Trump speech on coronavirus may be his Katrina moment

1 Tony Holohan stepping back from role as chief medical officer
2 All change at the unique Ashford Castle in era of Covid-19
3 Several factors pushing Boris Johnson towards a Brexit deal with Brussels
4 Bobby Storey: The IRA's planner and enforcer who stayed in the shadows
5 Pygmalion pub mired in weekend social distancing row
Real news has value SUBSCRIBE