Helicopter money: A direct economic shot in the arm for all citizens 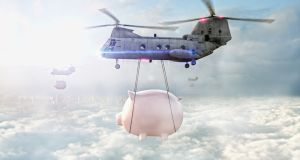 Milton Friedman used the analogy of dropping bank notes from a helicopter to illustrate how creating money and distributing it to people would be a more straightforward means of boosting consumption. Photograph: Getty Images

Picture a world in which the European Central Bank (ECB) gives Ireland enough money to house every homeless family in the State, or to fund a new children’s hospital, or to compensate businesses and citizens from the fallout of Covid-19? Suppose next that this is a once in a lifetime gift to Ireland and we never have to pay a cent of this money back.

Sounds far-fetched? Yes, it does, but this is exactly the type of policy being discussed within some of the world’s leading financial institutions. This is the world of “helicopter money”.

What is helicopter money, why is it such a hot topic and what are the implications for Ireland and elsewhere?

The term was coined by the economist Milton Friedman in 1968. It is an unconventional monetary policy suggested as an alternative to quantitative easing (QE) when interest rates are near zero (as they are in Europe) and when an economy is facing deflation (once again, Europe).

It is, if you like, plan B when plan A is at risk of failing. Friedman used the analogy of dropping bank notes from a helicopter to the citizens below to illustrate how creating money and distributing it to people would be a more straightforward means of boosting consumption. A direct economic shot in the arm for all citizens.

Former Federal Reserve chairman Ben Bernanke has suggested on a number of occasions that helicopter money could be used as an “extreme tactic” when levels of government debt are high and conventional interest rate policy isn’t working – twin threats which are becoming all the more evident in Europe with the advent of Covid-19.

There are different ways this helicopter drop can take place.

Staying with the European example, money could be given by the ECB to individual governments for specific purposes such as healthcare, green projects or housing.

Alternatively, it could be given directly to citizens bank accounts leaving it up to individuals to decide how to spend their money.

Modern money theory favours the former – the ECB providing money to fund public spending or a tax cut. Recent moves by Italy to forgo mortgage payments could well fall into that realm. How else will Italian banks stomach bad debts? Dropping money directly from the ECB is one solution.

Mario Draghi, the former president of the ECB, is on record as saying he found the concept of helicopter money “very interesting” and many of the world’s leading economists see it as a powerful tool.

Michael Feroli, chief US economist at JP Morgan, says that coronavirus outbreak could be a test of the Federal Reserve’s resolve in deploying non-conventional tools. Other proponents of helicopter money see it as being less threatening than QE.

As with any dose of heavy-duty drugs, QE came with side effects. By driving interest rates to 50-year lows, central banks sparked another globally synchronized property boom.

In Ireland, as we all know, in spite of the boom we had no builders to build, no banks to lend and no money for deposits. When the builders and banks did eventually return, big money had squeezed out our citizens. Leaving us in a continuous struggle to catch up with those lost years of no new home builds.

Getting agreement across European member states for such an ambitious and contentious programme would be extremely hard since it debases the value of the euro and as a result damages savers.

They say each generation is haunted by the fears of their grandfathers. In the US, it was the Great Depression. In Germany, it was the era of hyperinflation that followed the first World War. It is no surprise, therefore, that Germany in particular has been critical of helicopter money as it is fearful of the impact it will have on savings and see it as a potential harbinger of inflation. But, if economic conditions deteriorated rapidly sparking another banking crisis, helicopter money could certainly be very quickly on the table as a policy option in Europe.

There are risks. As mentioned the euro would weaken which would be a red flag to the likes of Donald Trump as it renders US exports less competitive, potentially triggering a trade war. Another danger is that by central banks giving free money to governments, politicians are empowered with a potent tool – money – potentially threatening democracy in an age of rising populism.

For Ireland, if used judiciously helicopter money could alleviate the economic fallout from Covid-19, our housing or hospital crisis but its deployment would need to be ringfenced and administered with the full rigours of accountability. Are we up to that task?

Is helicopter money likely in our life time? In my view, yes. However, garnering agreement in Europe will be extremely difficult and it may take a catastrophic event such as another banking crisis to force politicians to agree to it. But one thing is clear, whether or not Covid 19 is the trigger, the days when helicopter money is discussed as a practical policy tool are fast approaching.

Bill O’Rahilly is Ireland director with Edison Group and formerly head of markets at Citi, Ireland. The views expressed are personal.