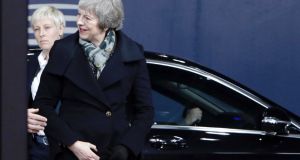 British Prime Minister Theresa May arrives in Dublin this evening seeking further leeway on the Border backstop. She will be hoping today’s warning from the ESRI that a no-deal Brexit could almost halve Irish economic growth next year will help her case. In its latest report the economic think tank assesses the short term impact of various Brexit scenarios. As Eoin Burke-Kennedy writes: “With the Brexit wave now about to crash upon these shores we’re again fumbling around, weighing up various forecasts, most of which will prove to be wrong. The question is how wrong.”

Speaking to reporters in Washington, Minister for Finance Paschal Donohoe said: “We have always acknowledged that a no-deal scenario would be an exceptionally serious development for the Irish economy but this is why we have aimed to move into 2019 with national finances that are fully balanced, it is why we made the decision to prioritise capital investment in our economy next year at a time of risk.”

Fiona Walsh reports from London on how the Brexit chaos is taking its toll on the already troubled UK high streets.

Soaring house prices in parts of the country alongside slowing growth rates elsewhere offer “little hope” for people trying to buy a home, financial brokers said. According to the latest data from the CSO, house prices in the midwest have soared by more than a fifth over the past year, several times the slowing rate of growth in areas of Dublin.

Michael O’Keeffe, chief executive of the Broadcasting Authority of Ireland (BAI), says he “stands over” a regulatory determination he made in 2012 that Denis O’Brien does not exercise “control” over Independent News & Media. He was speaking at the launch of the BAI’s public consultation on media plurality and ownership. In his analysis Mark Paul writes that this year, Ireland slipped two places to 16th in the World Press Freedom Index, compiled by the advocacy group Reporters Without Borders. That’s 10 places behind Jamaica and six behind Costa Rica.

Meanwhile, INM management told its staff on Tuesday it will request internal and external investigators to look into allegations that the computers of some senior editors were examined by a cybersecurity expert in 2015.

The Irish arm of Declan Ganley’s communications technology company, Rivada Networks, increased its accumulated losses last year by €300,000 to €1.3 million, according to its recently filed accounts. A note to the accounts says Rivada spent €280,000 last year entertaining “potential investors” through one of Mr Ganley’s companies, Lough Cutra Shoot, which has shooting rights on an estate in Galway.

Finally, in her column this week Fiona Reddan sets out a list of dos and don’ts for Ireland’s retailers this Christmas, that includes the thorny issue of dishing out (and honouring) vouchers.

1 In this strangest of recessions, what happens next for Ireland?
2 Estée Lauder staff at Dublin airport plan further strike action
3 Bank of Ireland sees about 2,000 staff apply for voluntary redundancy
4 Michael O’Leary is the boss you want to lead an airline out of crisis
5 Overhaul of lease arbitration regime would be a game changer for retailers
6 Should I switch bank now with Ulster Bank at risk of closing?
7 Legal tech company Brightflag raises €7m in new funding round
8 What agriculture can learn from Charles Darwin
9 Paywall vigilantes pursue a selfish course, not a moral one
10 Apple’s Irish company structure key to EU tax finding
Real news has value SUBSCRIBE