US and China hold high-level talks to resolve trade conflict 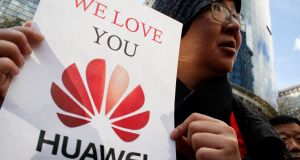 Lisa Duan, a visitor from China, holds a sign in support of Huawei outside of the bail hearing of Huawei CFO Meng Wanzhou, who is being held on an extradition warrant in Vancouver, British Columbia, Canada. Photograph: David Ryder/Reuters

Top Chinese and US trade officials have resumed negotiations to resolve a trade conflict between the world’s two biggest economies, despite a diplomatic row over the arrest of the chief financial officer of tech giant Huawei.

Vice premier Liu He spoke with US treasury secretary Steven Mnuchin and trade representative Robert Lighthizer by phone on Tuesday morning, China’s ministry of commerce said in a brief statement.

President Xi Jinping and US president Donald Trump brokered a deal earlier this month, but there were fears the deal might be scuppered after Meng Wanzhou, daughter of Huawei founder Ren Zhengfei, was arrested in Vancouver on December 1st at the request of US authorities for allegedly violating American sanctions on selling technology to Iran.

Under the terms of the deal agreed at the G20 in Buenos Aires, Mr Trump agreed to pause raising tariffs on Chinese imports for 90 days while negotiations got under way.

While Ms Meng’s arrest casts a shadow over the talks, both the US and China have indicated that they want to keep the issues separate.

However, Huawei is a “national champion” and a source of much pride, and Beijing could be forced to take action amid rising public anger, particularly if she is held in custody. Some Chinese companies and individuals have started boycotting US products, according to local media.

The Sichuan chamber of commerce in Shanghai urged its members to boycott Apple products and support Huawei, the world’s largest supplier of telecoms network equipment and the second-biggest maker of smartphones.

“Washington is bringing terrorism to business competition,” ran an editorial in the Global Times.

“Washington has stopped being reasonable and is using the arrest as an attempt to thwart Huawei’s future development. The primary purpose is to scare off US companies and companies from other nations from using Huawei technology, elbowing Huawei out of the future global 5G system,” the editorial said.

“And if Washington’s new terror tactic prevails in the business world, other countries will take similar action to target any company they want, using the excuse of their domestic laws. Business practice will be replaced by hooliganism. All the companies in the world will be under threat.”

Ms Meng’s bail hearing continued for a third day on Tuesday. Her lawyer David Martin has proposed that she be allowed to stay in one of her properties in Vancouver, promising that she would be closely monitored and would cover the costs of security.